Medical costs are a major issue for most of the world. In the U.S., aging demographics, a sedentary life style, drug pricing and lack of transparency all contributed to the $4.65T spent on medical care in 2018. However, of all the avenues that could potentially reduce medical costs, the most impactful one is innovation. Although drug discovery is an important component of improving society’s overall health and reducing costs, there are other pieces to this puzzle that could work in tandem with innovative therapeutics. These include genetic/molecular testing that identifies disease earlier and highlights what drugs could work for an individual (precision medicine); wearable devices that monitor and warn of pending health issues; and gene therapy/editing that either adds a missing/corrector gene, or alters a person’s current genetic structure to fix an underlying disease. In tandem, these innovations could drastically alter the life span or quality of life for most individuals while addressing the mounting cost pressure that most health systems face.

The annual costs of diabetes through direct (medical costs) and indirect costs (loss of work) is $350B per annum in the U.S. On a global basis, the cost is even more ($760B). Whether it’s type one (loss of beta cells) or type two (insulin resistance) diabetes, the body’s ability to turn carbohydrates into cellular energy is impaired. If left untreated, or if treatment is sub-optimal, diabetes can lead to a number of afflictions including loss of vision, end stage kidney failure, cardiovascular disease, loss of limbs and death. Although type one (child onset) and severe type two (adult onset) diabetes are different in their origin, patients primarily treat their diseases the same; the current methods of treatment are diet, weight control, blood sugar monitoring via finger sticks, and short or long acting insulin, including multiple injections several times a day.

However, with the integration of insulin pumps, continuous glucose monitors and software driven algorithms, the artificial pancreas was developed by Medtronic in 2016. Figure 1 describes the artificial pancreas, which is a closed loop system (no need for finger sticks or injections) that is driven by constant feedback by the CGM to the software embedded in the insulin pump. The software adjusts the amount of insulin being released by the pump based on food intake, exercise, and sleep; sleep is a high risk period where a person can die from low blood sugar (hypoglycemia). 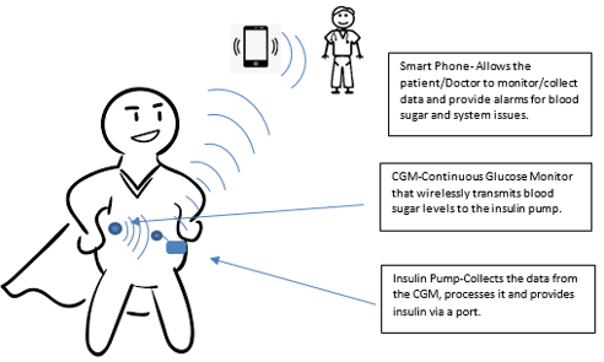 In the future, a number of developments could significantly alter the disease for both type one and type two diabetics. These potential developments include weight loss drugs – may result in a pre-diabetic person (type two) losing enough body mass (10%+) to keep the disease from progressing – or gene editing/therapy – targets and reduces the lipid (fat) storage in adipocytes (fat cells), therefore reducing the body’s insulin resistance and glucose levels. Also on the horizon are so called “smart pens” that have connective capabilities (to smart phones) and imbedded software similar to a smart insulin pump but at a fraction of the cost. For type one diabetics, the potential for either re-engineering the body’s own pancreas cells to ensure the body’s immune system does not destroy them, or the ability to harvest cells from a healthy donor, multiply them in a lab and engineer the cells so the body does not reject them, could significantly change the course of the disease.

Diagnostics are at the forefront of early detection and treatment of diseases. However, a large portion of diseases are discovered in the latter part of a disease’s progression. For example, the natural cadence after a patient develops symptoms is to meet with a physician and then undergo a subsequent battery of tests to help formulate a diagnosis. This process is starting to change with the introduction of more specific assays and genetic testing. This enhanced testing could allow for earlier detection/treatment and drastically change the prognosis; such is the case for colon cancer.

Colon cancer is the third most common type of cancer and is estimated to have an annual economic burden of $16.6B in the U.S. Moreover, 33% of patients die from the disease within five years of prognosis with early detection a key determinant of survival. Figure 2 depicts the economic impact left behind by other types of cancers. Specifically, early detection of colon cancer can result in localized treatment (surgery and radiation versus chemotherapy) and boost the five year survival rate to 90%. Historically, detection of colorectal cancer relied on a number of factors (age, smoking, diet and alcohol use) with the primary diagnostic tool being a colonoscopy. Although colonoscopies have a high detection rate once the procedure is performed, the issue is patient compliance. Due to the need for fasting, preparation, general anesthesia, and anxiety over the actual procedure, 50% of patients never go through with the colonoscopy, while another 15% of procedures will be inconclusive due to poor preparation.

Recently, a new non-invasive diagnostic tool has been introduced in the U.S. that could change the course of colon cancer. This test is home-based and uses a fecal matter sample which is shipped to a central lab for analysis. The test, brand name Cologuard from Exact Sciences, detects 92% of colon cancers and costs approximately 18% of what a traditional colonoscopy costs ($3,700). Although this is not the 100% detection rate associated with a successful colonoscopy, subsequent Cologuard tests (conducted every three years) can reduce this gap. More importantly, with colonoscopy compliance rates at 50%, Cologuard fills a large unmet medical need that not only decreases the mortality rate through early detection, but reduces the cost burden of the disease. 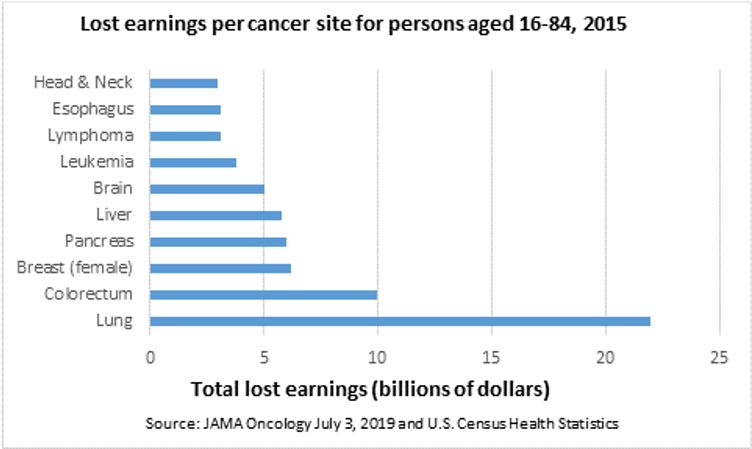 Despite the strides in earlier detection and treatment, cancer remains the second leading cause of death in the U.S. with a large and growing economic impact.

As previously noted, early diagnosis in most cancer types can increase a patient’s survival rate. In lung cancer, for example, the majority of patients are tested after they present physical symptoms (shortness of breath, chronic cough, coughing up blood, consistent infections). At this point, a number of images (X-ray, CT scan or MRI) are taken and then a biopsy could be performed to extract the cells from the potential tumor. Currently, a simple blood test does not have the needed accuracy to detect the disease. Therefore, early detection is a probability game dependent on patient factors, such as: has the patient smoked, have a family history of the disease, or have they been exposed to asbestos or other carcinogens.

One of the biggest impediments to testing accuracy is the way the cancer cells hide themselves from the immune system. Without the body recognizing the cell as a threat, the buildup of white blood cells to fight the cancer doesn’t occur and hence is not found in a blood assay test. There are a number of diagnostic companies working to overcome these issues and with each new generation of genetic testing equipment, specificity and accuracy increase. Detecting and treating any form of cancer before it can multiply and metastasize (spread) increases a patient’s survival rate and can keep the cancer in an adjuvant setting; in such a setting, the tumor is caught early, surgically removed, and drugs are used to prevent a relapse.

Once diagnosed, lung cancer treatment is historically very aggressive, including a cocktail of cytotoxic agents referred to as chemo-therapy. These drugs are introduced to the entire body with the goal of preventing the cancer cells from dividing and spreading. Despite chemo-therapy, only 23% of patients diagnosed with non-small cell lung cancer (85% of total lung cancer) were alive after five years. Enter immunotherapy, a therapeutic that assists a patient’s immune system in eliminating the cancer cells.

Immunotherapy targets the PD-1/PDL-1 connection and unmasks the cancer cells so the immune system recognizes and attacks the mutation, a process pictured in Figure 3. In first line non-small cell lung cancer, the addition of Keytruda (an immunotherapy by Merck & Co. Inc.) to a chemotherapy regiment doubled the over-all survival rate of patients when compared to chemotherapy alone (22.0 months versus 10.7 months). While these drugs are not a cure, immunotherapy is an important first step. Moreover, the potential to combine immunotherapy drugs with other therapies (such as adoptive cell and gene editing) could eventually lead to the elimination of all cancer cells.

Figure 2 How does immunotherapy work?

Adoptive cell therapies entail isolating, extracting, re-engineering (in some cases), and multiplying a patient’s cells. One example of this is when a patient’s tumor-infiltrating lymphocytes are isolated and extracted. The cells are then multiplied in a laboratory and infused back into the patient. A second approach would be to harvest a patient’s T- cells, re-engineer the T-cells to express a specific antigen, multiply the cells, and then infuse them back into the patient. In both approaches the re-introduced cells would recognize the cancer cell as a foreign body and attack. As the re-introduced cells are depleted, the above process could be readily repeated as the lab would have the patient’s cells frozen and in storage. Gene editing holds the promise of a one-time procedure to knock out the virus that causes the disease (such is the case in cervical cancer) or to correct the underlying mechanism responsible for the uncontrolled cancer growth. One of the biggest challenges facing adoptive cell therapy is that the side effects, including cytokine response (severe inflammation), could lead to death. Gene editing also faces a challenge in that it is unknown what the permanent change to a patient’s genetic structure could lead to in the future.

Medical innovation has a multiplier effect: it improves the lives of those affected by a disease while reducing the long term healthcare costs and financial strain on the economy. Combining genetic research, advances in medical device technology, and improved diagnostics is leading to earlier disease detection, better monitoring, and the ability to identify what therapies work best for an individual patient. These combined puzzle pieces eventually lead to fewer side effects and better patient outcomes. With the next wave of innovation in front of us (gene editing and adoptive cell therapy), the potential to cure a host of diseases could occur within the next decade, putting further downside pressure on medical cost inflation, and lowering a host of medical costs for patients worldwide.