Throughout the second quarter, persistent inflation took its toll, accelerating to a 40-year high in May. The Consumer Price Index rose 8.6% on a year-over-year basis, eroding consumer spending power, corporate profitability, and overall consumer and corporate confidence. As a result, economic growth is slowing, and the probability of a recession has increased.

To quell persistent inflation, the Fed raised interest rates at its mid-June meeting by three-quarters of a percentage point (75 basis points), the most significant increase since 1994. The Fed signaled it will keep hiking rates aggressively in 2022, and will shrink its balance sheet by $47.5 billion/month, doubling that to $95 billion/month in September. We anticipate a fed funds rate of 3.4% by year-end.

“The committee is strongly committed to returning inflation to its 2% objective.”
FOMC statement June 15, 2022.

The degree to which the Fed will have to tighten monetary policy in order to control inflation, with the associated risk of an economic slowdown or recession, depends on several factors. These include how quickly supply-side issues resolve, the response of consumer and corporate spending to tighter financial conditions, and whether the Fed retains its credibility as an inflation fighter. As former Fed Chair Ben Bernanke recently wrote in a New York Times op-ed, “Inflation will not become self-perpetuating, with price increases leading to wage increases leading to price increases, if people are confident that the Fed will take the necessary measures to bring inflation down over time.”

While these policy actions will help cool demand, they will weaken the economy and lower corporate profits, leading to a potential increase in unemployment. The Fed is hoping for a “soft landing” whereby the economic slowdown is just enough to break inflation without such a significant decrease in demand or increase in unemployment that the economy tips into a recession. With an average of two openings for every person seeking a job and low unemployment claims, the Fed may succeed. However, because monetary policy acts with a lag, we may not see the full impact of the Fed’s tightening on the economy until mid-to-late 2023.

Technically, a recession is defined as two consecutive quarters of negative GDP growth. Negative growth in the first quarter was driven by a very large trade deficit, and we expect to see second quarter growth similarly affected by waning corporate and consumer confidence, leading to a decline in demand. However, for this to be deemed an “official” recession by the National Bureau of Economic Research, broader economic weakness needs to prevail, impacting personal income and unemployment. Typically, three consecutive months of rising unemployment precede a recession, but that has not yet happened, reflecting a still-tight labor market.

Housing, which remains an important part of our economy, was met with growing headwinds in the second quarter as mortgage rates topped 6%, dampening demand and possibly signaling the early stages of a slowdown. At the same time, a long-term lack of supply of homes offers some positive support for this market. As compared to what was happening in the housing market leading up to the Great Recession, mortgage debt levels are much lower today and many buyers are purchasing with cash.

Two trillion dollars of excess savings bolstered by pandemic-based stimulus, a strong job market and rising wages have provided a strong buffer for many consumers. However, with increasing prices, this buffer has begun to shrink. Credit card balances are on the rise, indicating a more financially-constrained consumer, which does not bode well ahead of possible increases in unemployment.

How Long Will Inflation Persist?

A slowing of the consumer-driven US economy ultimately should dampen inflationary pressures. Two big issues are how long it will take the Fed to achieve its 2% inflation target and how patient investors will be. As we have noted in previous Investment Review and Outlooks, the current economic scenario is in stark contrast to the levels of inflation and interest rates experienced in the late 1970s and early 1980s. At that time, the Fed had to implement a much tighter interest rate regime in order to reduce inflationary pressures and the 10-year US Treasury yield reached a high of 15.32%. By contrast, the 10-year US Treasury yield ended the quarter at 2.93%.

Inflationary pressures, aggressive Fed policy, supply and labor constraints, as well as geopolitical concerns have negatively impacted the equity markets. As investors increasingly have worried about inflation, higher interest rates, and the impact of a possible recession on future corporate profits, they have reduced the prices they are willing to pay for current earnings, taking the equity market into bear market territory. A bear market occurs when a broad market index falls by 20% or more from its most recent high. At the end of the quarter, the S&P 500 Index had declined 20% from the high established in the first week of the year.

As seen in the chart below, most of the declines in the market have been driven not by falling current profits but by the uncertainty about future profit weakness compressing earnings multiples (P/E ratios). As the global economy slows, due to tighter monetary and fiscal policy, profits will decline. Estimates for future profits are just beginning to roll over and we expect this trend to continue in the coming months. Revenues and profit margins are impaired during a recession, and profits have tended to decline by approximately 20%. 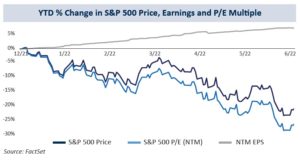 A Historical Perspective On Bear Markets And Recessions

After entering bear market territory, the S&P 500 Index typically fell for an additional one-to-two months before reaching a trough. The median peak-to-trough decline during these bear markets equaled 27.7%. 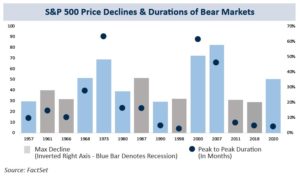 Staying The Course In A Turbulent Time

The current level of excessive volatility likely will persist at least until some clarity emerges as companies report their second-quarter earnings. Their forward guidance will provide insight about the operating challenges caused by current economic conditions.

Even if we are fortunate enough not to experience an economic recession, an earnings recession still is possible. Coupled with slower growth, profit margins come under pressure as companies face higher expenses for wages, transportation, and input costs. As a forward indicator, today’s volatile equity market already is factoring in a slowdown and more modest corporate results.

Patience For A Prolonged Recovery

A traditional bear market often plays out over the course of a year or more, and it may take some time to see a market recovery. Patience to stay the course will be key and it is important to fight the urge to time the market. As the chart below shows, missing only the single best month in every year results in a return only slightly better than T-Bills. 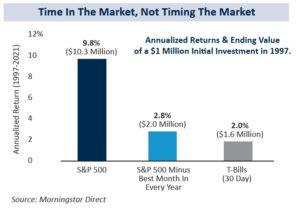 In a rising interest rate environment, attractive bond yields are back on investors’ radars for income generation and as a diversifier to equities. The yield on the 10-year Treasury was below 1.5% to start the year but stood at nearly 3% by the end of the first half.

Currently, we see compelling yield opportunities and value at the shorter end of the yield curve, where an investor can receive a meaningfully higher yield without adding duration risk. Given the low interest rate environment of the past several years, many investors remain underweight fixed income.

Corporate bond issuance has declined significantly, and we expect lighter issuance going forward. Much of the corporate sector has paid down debt, in some cases with the help of pandemic-related stimulus, or has refinanced debt during the period of record low-interest-rates. As a result, we see little cause for concern about an impending refinance cliff in a higher interest rate regime. A refinancing cliff refers to maturing debt that gets refinanced at higher rates, negatively impacting corporate profits.

Demand for municipal bonds waned during the period as tax increases expected last year did not come to fruition. Despite flagging demand, tax-free yields did not rise as much as Treasury yields, leaving the municipal market rather rich in comparison. Municipal bond issuance and refinancing volume remained light, preventing supply from overwhelming a skittish market. In fact, year-to-date new issuance is running 14.5% behind last year’s pace, while refunding volume is down 53.5%. We do not foresee an imminent pick-up in volume since states still have significant pandemic-related stimulus money in their coffers, making debt issuance unnecessary for many capital projects.

Recession and inflation concerns continue to buffet the financial markets. We expect the resultant increase in volatility to continue until inflation data heads in a more benign direction, which will allow the Fed to pause. Now, more than ever, the following guidance rings true:

At 1919 Investment Counsel, LLC we will help you navigate what may be a challenging second half of 2022 and beyond.

The information provided here is for general informational purposes only and should not be considered an individualized recommendation or personalized investment advice. Past performance is not a not a guarantee or indicator of future results. No part of this material may be reproduced in any form, or referred to in any other publication, without the express written permission of 1919 Investment Counsel, LLC (“1919”). This material contains statements of opinion and belief. Any views expressed herein are those of 1919 as of the date indicated, are based on information available to 1919 as of such date, and are subject to change, without notice, based on market and other conditions. There is no guarantee that the trends discussed herein will continue, or that forward- looking statements and forecasts will materialize.

This material has not been reviewed or endorsed by regulatory agencies. Third party information contained herein has been obtained from sources believed to be reliable, but not guaranteed.