Each quarter we highlight an investment theme from the Disruptive Innovation Strategy, focusing on the megatrends driving disruption and the companies we believe are best positioned to capitalize. This quarter we revisit how disruption has played out in past economic shocks and highlight companies we believe will emerge stronger from the current pandemic.Companies mentioned in this series should not be perceived as specific stock recommendations. However please note that each security mentioned in this material is currently held by the Disruptive Innovation Strategy.

How COVID-19 can be an accelerant for disruptive innovation

The sudden economic standstill triggered by COVID-19 is widely expected to result in a short-term contraction in GDP, exceeding 10% in the United States by some estimates[i].  Based on past recessions, such an economic shock will likely lead to corporate triage initially, but will be followed by strategic decision-making which could have far-reaching implications for many companies.  For the weak, the decision may be to shut down, while the more timid may choose to hunker down and preserve capital.  But for companies with a truly innovative and disruptive business model, economic turmoil may provide the opportunity to accelerate disruption.  For example, when the dot-com bubble ended, financial markets imposed a level of discipline, limiting access to capital to all but the most promising companies.  That led to the emergence of Web 2.0 companies such as Google, Facebook and Salesforce.com, whose high-productivity offerings were rapidly adopted by their customers out of necessity.  Likewise, in the aftermath of the 2008 financial crisis, FinTech leaders, Square and PayPal, gained rapid popularity among disaffected consumers who wanted to embrace technology in order to manage their personal finances.  Banks, who are generally are slow to embrace creative destruction, hunkered down, and could only watch as consumers adopted PayPal, Venmo, Square Cash, and crypto-currency.

As we look ahead to the conclusion of the pandemic, we see certain companies in the Strategy particularly well-positioned to emerge stronger.  The products and services they offer serve an immediate need, but they also introduce a wider pool of prospective customers who might not otherwise be compelled to try services like telemedicine or next-generation collaboration tools.  Below we review a few of the companies in 1919’s Disruptive Innovation Strategy, and how they are positioned for the economic landscape on the other side of the pandemic.

Teladoc is the only pure-play, publically-traded company facilitating virtual doctor visits for its members.  The company estimates that of the 1.25 billion outpatient care visits in the US each year, roughly one third, or over 400 million, could be addressed using telemedicine.  With healthcare comprising nearly 20% of GDP, the potential benefits of telemedicine are clear.  Patients can hold video calls with a doctor on a computer or mobile device without leaving home, or visiting a hospital emergency room, and doctors can accept patient visits on their schedule, using the platform Teladoc provides.  In addition, it incentivizes physicians and insurance companies to support the use of electronic health records to evaluate a patient’s history, and to prescribe medicine electronically.  For its part, Teladoc collects on average $22 per session for developing and hosting the platform.

At the end of 2019, Teladoc reported 4.1 million visits, representing 56% growth over the prior year.  While significant, it likely is only a small fraction of the doctor visits made by the 56 million patients covered under Teladoc’s contracts with insurance companies, and an even smaller fraction of the 400 million potential visits that can be served by telemedicine.  In the past, a major limiting factor for telemedicine adoption has simply been awareness of the service but the pandemic has changed this.  With doctors’ offices and urgent care facilities now closed, and hospitals focused on coronavirus, telemedicine is suddenly an attractive and necessary option.  In mid-March, Teladoc reported a surge in visits, rising 50% week-on-week, with more than half of all patients new to telemedicine.  It remains to be seen if this level of growth will continue beyond the pandemic, but it is clear that telemedicine now is being considered for the first time by patients and medical professionals, exposing a whole new generation of healthcare consumers to its advantages.

The Work From Home (WFH) orders globally have created an urgent need for tools like Slack, and as a result, the company has seen a spike in usage.  Founder and CEO Stuart Butterfield recently shared that while it took the company over four years to grow from 1 million users to 10 million as of early March 2020, it took less than two weeks to grow another 25% more to 12.5 million.  He also shared the figure below on Twitter showing a massive spike in the number of Newly Created Work Teams (“New CWT”) on the platform.  Renewal rates are usually high for Slack, in the 90% plus range, and importantly, returning customers in 2019 chose to spend 32% more, in dollar terms, when they renewed their subscriptions.  Both metrics are strong indicators of the value Slack brings to customers.  It is common for new, disruptive technologies to be held back by a general lack of awareness, especially in enterprise software, but the acute need for better collaboration tools, as highlighted by the pandemic, combined with strong renewal and expansion trends, are positive signs that Slack will come out of this period in an even stronger position. 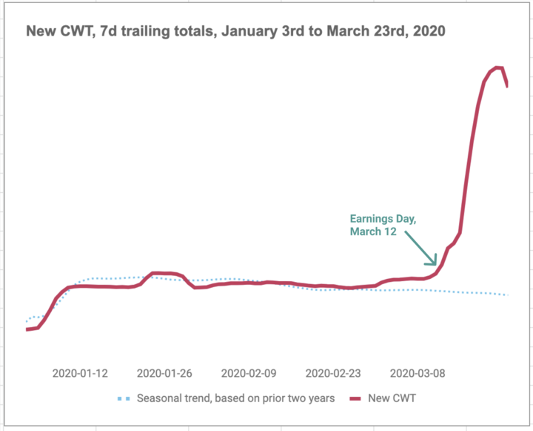 The disruption of linear television by services such as Netflix, Disney Plus, and Amazon Prime, has been underway for a number of years.  At the beginning, their value proposition was based on a disruptively lower price point for access to older, “long-tail” content.  As they gained scale, however, they were able to leverage user-data accumulated over time in order to produce original content.  Unlike traditional linear video distributors, DTC has the ability to engage users directly to make specific and personal recommendations for content available in an on-demand fashion.  With many communities living under “shelter-in-place” orders, reports from the streaming services are that viewership has spiked, with countries in Europe as well as India taking the unprecedented step of asking DTC companies to lower the bit rate of their video because viewership is so high.  At the same time, advertising agencies are reportedly bracing for a few rough quarters, as ad buyers demand clear quantifiable data which can best be found through digital advertising platforms like Google and Facebook.

Our original thesis in investing in DTC media platforms was that higher viewership over time would lead to greater engagement, which in turn would inform future content decisions.  The outcome of this virtuous cycle for streaming companies would be disintermediation of legacy video distributors as more people “cut the cord”.   The spike in viewership we are seeing today is likely to bring with it a spike in user engagement, particularly overseas where services like Netflix have low penetration.  At a minimum it should raise awareness of the advantages of streaming media, and serve as an accelerant for the disruption of linear television.

The globally-connected nature of the internet, and high-speed broadband in particular, have led to the emergence and rapid adoption of new services at an unprecedented rate.  We have reviewed three, including telemedicine, workforce collaboration, and direct-to-consumer media, highlighting the competitive advantages of Teladoc, Slack, and Netflix.  There are many others.  In normal times adoption is gated by the economic value proposition or simply a lack of general awareness.  But in times of economic turmoil, demands for these products and services are amplified as consumers embrace change out of necessity and firms embrace technology in order to survive.  In this Strategy, our focus is on the innovators driving disruption within their respective end-markets.  As in past economic dislocations, we expect that these and other disruptively-innovative companies will emerge in an even stronger position.

[i] COVID-19 Impact Update: US GDP to plunge -13% in Q2, Unemployment Approaching 9% by December,
by Joel Prakken, Ph.D., Chief Economist and Co-Head of US Economics IHS Markit (Mar. 20, 2020).
https://ihsmarkit.com/research-analysis/covid19-impact-update-us-gdp-to-plunge-to-13-q2.html