Clients often ask us: With so much data everywhere, if I want to understand what’s going on with the economy, what should I really pay attention to?

No one data point can explain something as complex and variable as the $20 trillion US economy, but a strong case can be made that one metric matters more than most. Like any metric, it is subject to choices about what is included and excluded, and how various inputs are weighted.

On balance, however, we believe that this metric – compiled from a variety of important inputs, published monthly for over 30 years, and often cited – is well worth following.

The Conference Board Leading Economic Index® (LEI) for the U.S. increased in April 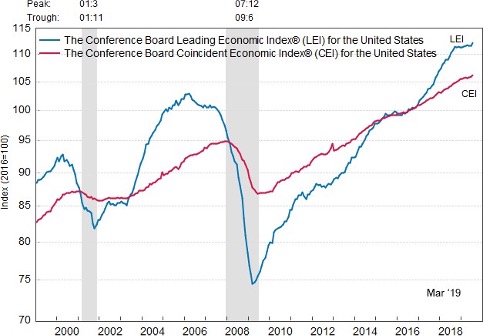 Source: The Conference Board, May 2019

Professionals call the LEI a “metric that matters” because it is a composite average of Leading Indicators that captures many of the most critical drivers of the US economy. The LEI indicates changes are likely to occur in economic direction in the next 12 months. Because the LEI considers movement in market, business, consumer and government activity, it mitigates the risk of overreliance on any one, or even several, economic drivers. The LEI has been a reliable predictor of US economic movement for over 30 years.

The LEI functions as a monthly early warning system that can predict peaks and troughs in the economy. Any change to the LEI of 5% or more in a given month has historically indicated that major shifts in economic direction will occur within the next year.

Just like the Standard & Poors 500 stock market index, the LEI represents a composite average of different weighted variables. The current LEI uses 1984-2011 as the time horizon against which it measures changes in the variables and arrives at a single index value. Over that 27-year span, there were significant peaks and troughs in GDP and economic activity, from the ‘90s boom to the ’00s dotcom bubble, but, in each case, the LEI has stood up well as a bellwether of future economic shifts.

The LEI is managed by The Conference Board, a non- partisan think tank of business leaders and economists founded in 1916, with membership of over 1,200 US companies. You can access the summary report and detail on each indicator at www.conferenceboard.org/data.

The Conference Board also provides an LEI for 11 other major countries, the Euro Area and a Global survey.