Establishing a sustainable food supply is among the greatest challenges of our time.  The United Nations estimates that the combination of population growth and economic expansion will require a doubling of the world’s food supply by mid-century.[1]  In many countries today, agriculture is a major consumer of land and water resources, and it also is a leading contributor to greenhouse-gas emissions globally.  Clearly, extending current practices is not a viable path forward.

Beyond Meat and Impossible Foods are among a new breed of alternative protein companies that are offering, for the first time, plant-based products which look and taste like real meat.  Veggie burgers have been sold for years, but they generally have languished in the vegan section because most true carnivores didn’t see the point.  This new combination of effective marketing together with a better tasting plant-based burger is one we believe can raise awareness of the health and environmental benefits of alternative proteins and which may eventually lead to a demand-driven, sustainable food supply.

The global meat industry today generates an estimated $1.4 trillion dollars annually, demonstrating the global appeal of animal proteins.  It is a market ripe for disruptive innovation by companies like Beyond Meat that use a fundamentally different manufacturing process to arrive at a similar product.  In our view, the investment opportunity is asymmetrically positive for first-mover, technology-driven companies like Beyond Meat that are able to establish a leading brand and can innovate in ways traditional meat producers cannot.  In this quarter’s Innovation Spotlight we analyze the underlying drivers and opportunities for Beyond Meat, which is the first of many investments we hope to make in this exciting investment theme.

The chart below[2] compares meat consumption vs. GDP per capita for countries around the world, highlighting the tendency for protein consumption to rise with economic prosperity.  While the US is a major consumer on a per capita basis, China consumes nearly twice as much on an absolute basis, a trend which has accelerated with economic growth.  Meat consumption in Latin America and Africa also is rising due, in part, to rapid population growth.  The impact of this growth can be found in the chart on page 3, which shows that today, half of the earth’s habitable land is allocated to the production of plant and animal proteins, with most of it used for grazing and cropland for animal feed.  Surprisingly, the same chart shows that while 77% of agricultural land supports livestock, livestock (including meat and dairy), only supplies 18% of the world’s caloric intake and 37% of its protein.  This means that agriculture, as it is practiced today, has a shockingly low conversion efficiency in terms of calories and protein produced per unit of land resources consumed.  As we show below, this shortcoming can be addressed directly through the introduction of alternative, plant-based sources of protein. 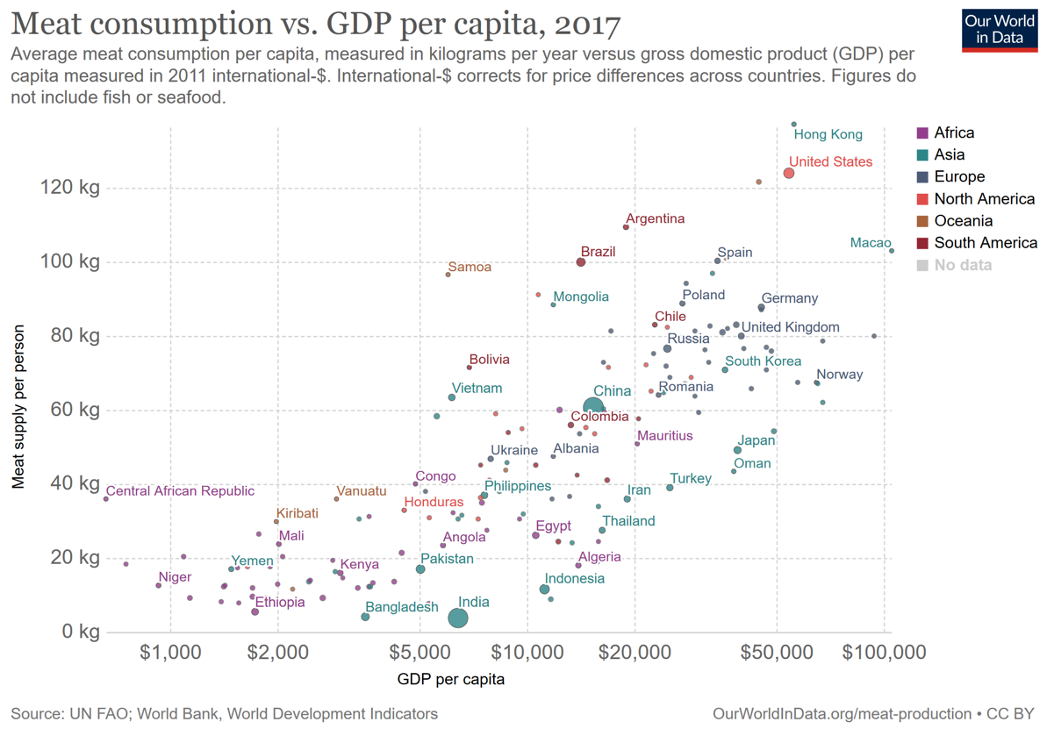 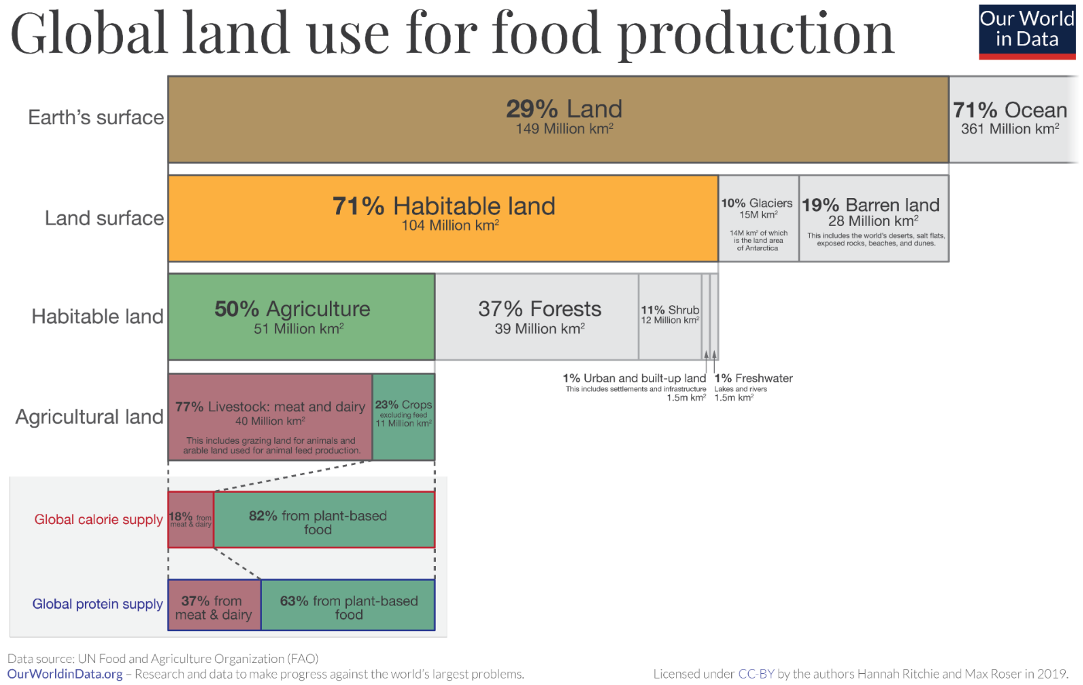 The new generation of alternative protein companies are following a path first blazed by soy and nut milk companies.  Rather than market nut milks to the 1% of the population who are vegan, or the 10% who are vegetarian, major food companies like Danone and Blue Diamond positioned their products for mainstream consumption by placing them in the dairy section, right next to cow’s milk.  Rising instances of lactose intolerance and concerns over bovine growth hormones were strong enough reasons for people to try these alternatives, and sales have grown to the point where soy, hemp and nut milks have now captured nearly 16% of the US retail dairy market[3]. 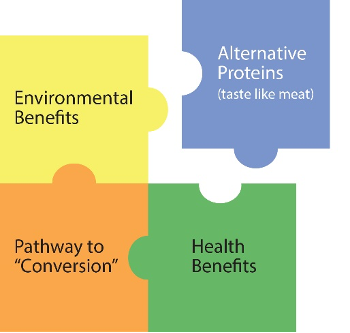 Companies like Beyond Meat and Impossible Foods are following a similar path by positioning their products in grocery stores alongside ground beef, and in local restaurants among hamburgers.  By emphasizing taste and how this new category can replace ground beef, consumers will first be introduced to the health benefits, while gradually developing an awareness of the environmental benefits of alternative proteins.  The benefits of a vegetarian or flexitarian diet have been known for some time, but the missing piece has been a plant-based protein that could serve as a drop-in replacement for meat for mass consumption.

The comparison below[4] shows the nutritional value of a Beyond Meat burger versus a ground beef patty. While both have similar calories and protein, the Beyond burger has nearly half the saturated fat, no cholesterol and nearly twice the iron of ground beef.  In addition, Beyond is GMO-free, which is not the case with the Impossible burger, which uses a GMO-based “heme” as a key ingredient[5] to give it its bloody, rare appearance and distinctive taste.  Beyond Meat clearly is gaining traction in the US with its beef, chicken and pork substitutes. The company reported on its June 2020 earnings call that US household penetration had doubled in the past year and, importantly, repeat order rates were up to nearly 50% in the month of June.  As we show below, this level of growth is unique among major US-listed food companies, and points to strong acceptance of this new category and Beyond’s growing brand strength 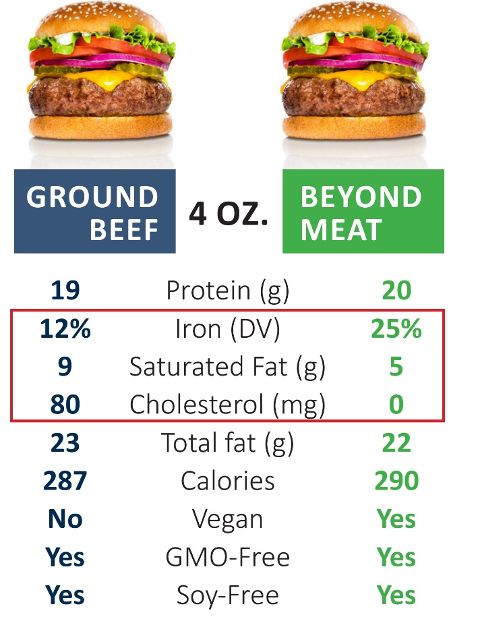 Beyond Meat is a technology-driven company that develops products which compete in the price-sensitive, commoditized meat industry.  The end results may be similar, but the manufacturing processes couldn’t be more different.  For example, the chart on the following page compares the amount of calories and protein needed to raise a cow in order to yield a single 4 oz. hamburger patty2.  The fact that a cow must be fed up to 16,000 calories and 500 grams of protein per hamburger shows the stunningly low conversion efficiency of plants into animal protein for food.  Alternatively, Beyond Beef’s products are made primarily from pea protein, canola and coconut oils, and water using a proprietary process to achieve a similar flavor profile.   The low conversion efficiency of livestock into food has forced farms to scale up in ways that are unhealthy to animals, such as dense industrialized farms and fisheries, and  unhealthy to humans, such as with a recent outbreak of swine flu in China which reportedly has been transmitted to humans[6].

Low conversion efficiency explains the disproportionate use of land devoted to livestock and animal feed described earlier, and is why the agriculture industry is a major consumer of water and contributor to greenhouse-gas emissions.  The chart below from The Economist[7] compares greenhouse gas emissions, freshwater withdrawals and land used to produce one kilogram of animal protein versus burgers from Beyond and Impossible Foods.  Given the resource limitations agriculture is facing, and the rising long-term demand for protein, alternative proteins are perhaps best positioned to address the major challenges facing the global food supply.

Since its IPO in 2019, Beyond Meat has grown to be the largest publically-traded pure-play food company in the world in the alternative protein space, with products that are sold in 85 countries. The company currently is building production capacity on three continents and is partnering with major grocery chains such as Alibaba-owned Fresh Hippo in China.  Their brand strength also is growing to the point where partnerships with quick-serve restaurants, such as KFC and Starbucks, feature “Beyond” -branded products.  We believe the outlook for Beyond Meat is bright, and highlight the chart on the following page comparing revenue growth estimates for major US-listed food companies, including Beyond Meat and household names such as Hormel, Kellogg and Tyson Foods.  Clearly, Beyond is in a league by itself and is expected to grow more than ten-times faster than its nearest competitor next year.  As major food companies such as Tyson enter this market, they will face the classic innovators dilemma of whether to invest in the R&D necessary to develop plant-based proteins, knowing that any success could cannibalize sales of their existing products.  By operating as a pure-play, Beyond is able to focus all of its resources on competing in this nascent market, while using its first-mover advantage to establish leadership.  Over the past two years, gross margins have more than doubled[8], and Beyond Meat recently reported 10% EBITDA margins, which is on par with Tyson Foods, while operating at only 1/100th of Tyson’s scale.  As the company grows, we expect it to invest productivity gains to maintain current margins while lowering prices into order to reach its goal of price parity with commodity ground beef by 2023. 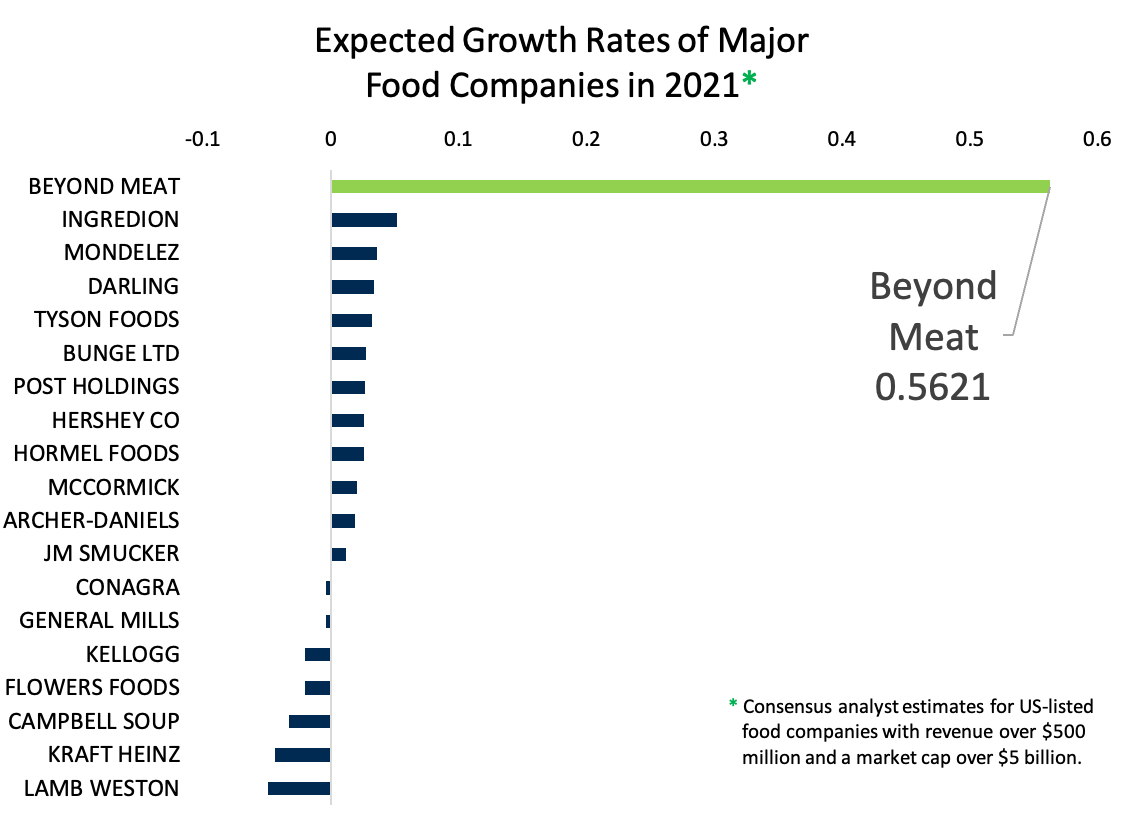 Very few investment themes offer the dynamics of Alternative Proteins, with a combination of a large addressable market, incumbents facing ecological barriers to growth, and a growing, insatiable demand for protein from a global population.  We look forward to the opportunity to make additional investments in companies like Beyond Meat that bring differentiated, technology-driven solutions to the world’s major challenges, while maintaining a clear focus on profitability. 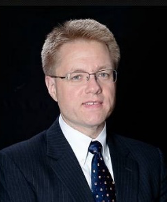