There have been significant macroeconomic and geopolitical changes since our last Investment Review and Outlook. The tragedy of the Russian/Ukraine war, inflationary pressures, the change in tone of future Fed policy, and ongoing supply constraints, have unsettled investors.

Market volatility has been the hallmark of the first quarter as the equity and bond markets have had to process daily headline news on a variety of fronts. Notably, negative equity returns occurred in lockstep with negative bond market returns, whereas typically the performance of these two asset classes is negatively correlated.

A Time of Transitions

There are various macroeconomic shifts underway that may prove to be headwinds for investors, including:

Pricing pressures emerged as a result of COVID-19 stimulus and supply chain dislocations, leaving inflation at a 40-year high. At its last meeting, the Fed raised the Fed Funds rate from near zero to range between 0.25% and 0.50% as a starting point to quell inflationary pressures. The Fed also penciled in at least six additional rate hikes this year, potentially raising the Fed Funds rate to slightly below 2% at the end of 2022 and to approximately 2.75% next year. These rate hikes will be implemented in conjunction with the end of QE, the Fed’s bond-buying program.

More recently, Chairman Jerome Powell said the Fed needed to move “expeditiously” to combat high inflation while also raising the possibility of 50-basis-point hikes instead of the six additional 25-basis-point hikes previously outlined. “If we think it’s appropriate to raise by a half point at a meeting or meetings, we will do so,” Mr. Powell has stated, signaling a bias toward lifting rates more quickly until the central bank sees clear evidence that inflation is falling to its 2% target.

It is important to note that while the Fed’s stated dual mandate is both price stability and full employment, it appears prepared to sacrifice some degree of employment in exchange for greater price stability in the coming months.

Inflation has become apparent to many Americans as gasoline prices soared in the quarter, fueled by the Russian invasion of Ukraine. According to the American Automobile Association, gas prices have jumped, on average, to $4.24/gallon from $2.88 a year ago at this time. The US and other countries have banned imports of oil, natural gas, coal, and some petroleum products from Russia in protest of Putin’s aggression, although, Americans already had been facing higher costs at the pump, primarily due to a return to the road after COVID-19 lockdowns. In late 2021, President Biden released some oil reserves to push down prices. However, the situation in Eastern Europe has negated those efforts.

In light of this geopolitical turmoil, energy resilience and independence are now the focus of many countries and governments, including energy from renewable sources as well. This transition may be bumpy, particularly if fossil fuel supplies are constrained in any way, which may result in a broader acceptance of a combination of energy sources, both renewable and fossil fuel derived.

As a result of the Russian invasion, the long-term impact from a reduced supply of commodities, such as oil and grains, and the accompanying higher commodity prices, is an issue that bears consideration and may reverse a period of relatively low commodity prices that Americans have enjoyed for the past decade.

An upswing in commodity prices also may have a negative impact on stocks and bonds and may spur inflation higher. In addition, heightened COVID-19 concerns in China as new variants emerge, have resulted in factory and port closures, which may further disrupt supply chains. Following the global pandemic, supply chain resiliency remains a focus for many firms that import from China and other areas of the globe.

The housing market remains under-supplied, with affordability stretched for many buyers. As interest rates rise, mortgage rates will increase, and buyers competing for limited housing stock may face larger mortgage balances and higher monthly payments as a result. Banks will be eager to lend, yet the combination of higher house prices and higher rates ultimately may dampen future demand for housing in general. 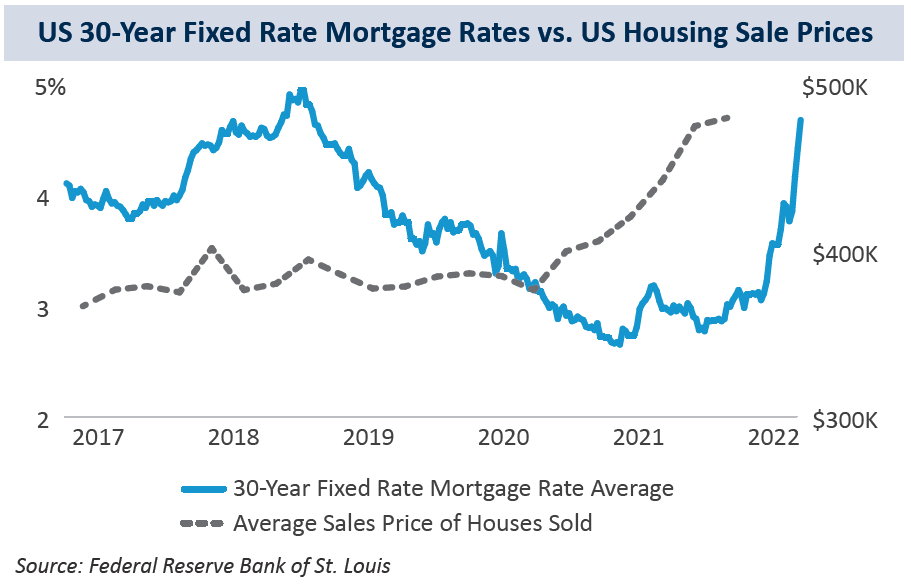 Despite the many dynamics discussed so far, we believe recession risk in 2022 is low for several reasons. US household wealth is up $40 trillion since the start of the pandemic to a record $150 trillion at the end of 2021. Net worth exceeds disposable income by eight times compared with four and a half times in the 1970s, although much of that wealth is at the higher end of the income spectrum. Fiscal stimulus did help Americans during the pandemic and was clearly meaningful at the lower end of income levels, providing a much-needed cash infusion for consumers and the economy as a whole.

There still is ample consumer savings and liquidity for many consumers to manage through this inflationary period. According to the US Bureau of Labor Statistics, as of January 2022 there were a record 11 million job offerings in the US economy, with more than two jobs available for every unemployed worker. In light of these factors, a 2022 recession does not appear to be likely.

Elevated volatility in response to higher inflation, rising interest rates, and speculation around the timing and extent of the Fed’s policy actions has plagued the stock market during the first quarter, resulting in dramatic daily pricing swings. The extent of intraday volatility, as shown in the following chart, has been unsettling for many investors, especially after a particularly low-volatility 2021. In fact, the S&P 500 Index has experienced more daily 3% swings in the first quarter of 2022 than in all of 2021. We expect volatility to continue throughout 2022. However, despite these dramatic swings, the S&P 500 recovered from even steeper losses to end the quarter down only 4.6%.

Our inflationary economy is potentially transitioning to a period of slower economic growth which, in turn, leads to lower revenue growth and profit margin pressures due to higher costs. Lower future growth projections usually lead to a compression of price/earnings multiples for growth stocks.

Small-cap growth stocks, in particular, have been negatively impacted in price and valuation. However, companies that can defend their profit margins and pricing, and have the ability to grow regardless of the economic environment, will always be in demand. Profitability is key as companies that operate at a loss have experienced the most significant short-term corrections.

As discussed in prior quarterly reports, investors have enjoyed above-average equity returns for the last 10 years relative to historical averages. With the equity market in transition, investors should expect more modest returns going forward.

Speculation surrounding interest rate hikes fueled volatility in the bond market. The number and magnitude of interest rate hikes that the Fed will orchestrate is a significant issue for 2022 and into 2023. Rates initially had not moved meaningfully until the latter half of March following a somewhat hawkish Fed meeting, leaving the yield on the 10-year US Treasury at 2.34%, almost a full point higher than at the start of the year.

With the Fed expected to hike more than previously thought, and uncertainty surrounding the outcome of the Ukraine-Russia conflict, companies took the opportunity to issue bonds to lock in rates. Even though current spreads versus Treasuries are wider than they were at year-end 2021, they are still well within normal ranges, keeping overall borrowing costs relatively low on a historical basis. Spreads of corporate bonds tend to widen versus US Treasuries in periods of heightened risk, which increases the cost to issue bonds.

The Treasury market, as measured by the Bloomberg US Treasury Index, experienced its most significant quarterly decline since 1973, despite a modest move in terms of yield, with a -3.11% year-to-date return.

A combination of both low yields and low coupons means that it does not take much to generate a negative return in Treasuries. 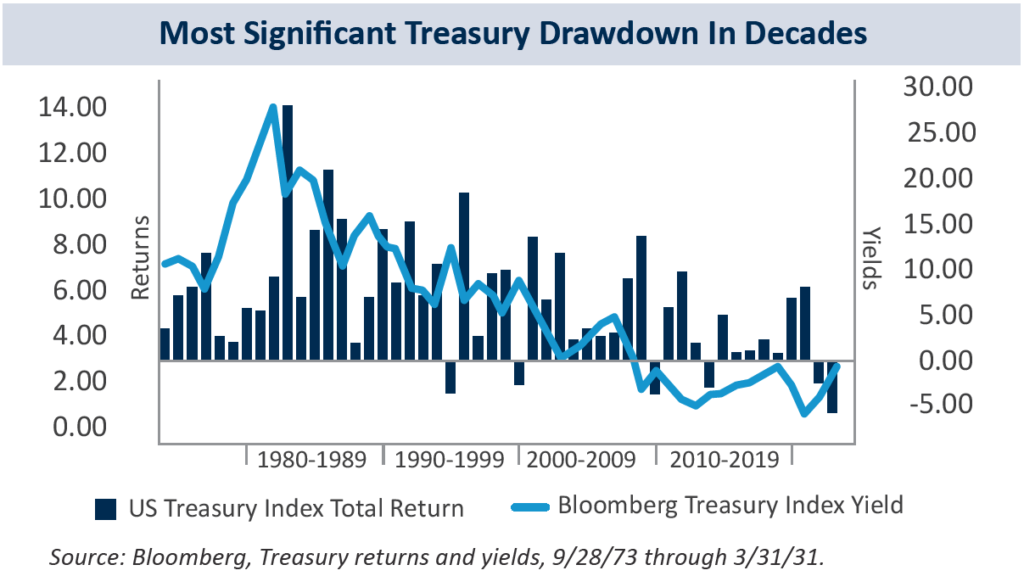 In response to the Fed’s more aggressive interest rate stance, Treasury yields have climbed rather quickly, particularly in the shorter end of the yield curve. This reflects expectations for a rapid series of interest rate hikes this year.

While the gap between 2- and 10-year Treasury yields has narrowed, seen by some as a leading indicator of recession, in August 2019, longer-term yields briefly dropped below short-term yields, but the economy remained strong with subdued inflation and low unemployment. This time around, should the curve invert for more meaningful periods, investors likely will become concerned.

In this rate environment, we expect the 2-year Treasury ultimately to end up in the 2.50% to 2.75% range while the 10-year Treasury should reach 2.75% to 3%, by year end, which we believe will slow growth but not bring about a recession..

An Update On Municipal Bonds

While the volume of new municipal bond issuance on a national basis is down 16% relative to this time last year, we expect issuance to increase as municipalities seek to issue bonds before meaningful interest rate hikes.

As always, we are committed to helping our clients successfully navigate challenging economic environments in order to achieve their personal investment objectives. Although many of the factors mentioned in this Investment Review and Outlook may spur short-term periods of market volatility, keeping a long-term perspective is key. At 1919 Investment Counsel, we will continue to focus on risk management for all our client portfolios and on providing the information and advice our clients need to stay the course.

The information provided here is for general informational purposes only and should not be considered an individualized recommendation or personalized investment advice. Past performance is not a not a guarantee or indicator of future results. No part of this material may be reproduced in any form, or referred to in any other publication, without the express written permission of 1919 Investment Counsel, LLC (“1919”). This material contains statements of opinion and belief. Any views expressed herein are those of 1919 as of the date indicated, are based on information available to 1919 as of such date, and are subject to change, without notice, based on market and other conditions. There is no guarantee that the trends discussed herein will continue, or that forward- looking statements and forecasts will materialize.

This material has not been reviewed or endorsed by regulatory agencies. Third party information contained herein has been obtained from sources believed to be reliable, but not guaranteed.