Consumer-Driven Economy Closes Out The Year On A High

Robust consumer spending, historically low unemployment and rising wages proved to be perfect ingredients for economic growth in 2019 and resulted in exceptionally strong performance from both the equity and fixed income markets. This surge in consumer spending was not fueled by consumer debt, as the personal savings rate increased to 7.9% by year-end. An unemployment rate at historic 50-year lows, and layoffs near multi-decade lows (as measured by unemployment claims), set the stage for continued growth. 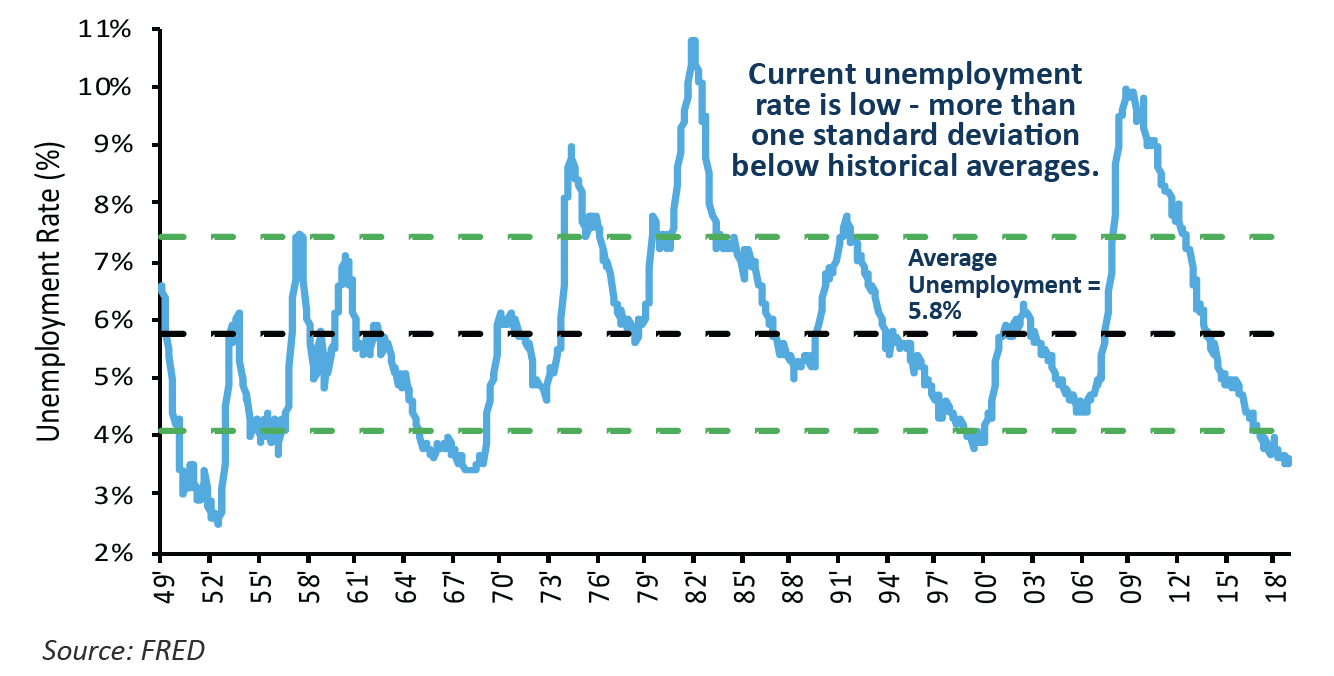 Business confidence seems to be catching up with the optimistic US consumer as captured by The Conference Board’s Measure of CEO Confidence. This mindset should lead to increased capital investment and growing loan demand.

As we look back at capital expenditures (CAPEX) during the past decade, the following two observations can be made:

With business confidence rising, we expect to see both types of CAPEX spending grow, as corporate managements invest for future growth.

The Global Search For Inflation Continues

On the global front, progress with trade agreements, including the Phase-One deal with China and the USMCA, was a promising development. However, inflation was on the minds of investors across the globe.

One of the factors in this regard has been globalization, which has allowed for a reduction in manufacturing costs, resulting in price cuts on goods and services around the world and subdued inflationary pressure. In addition, slowing population growth, due to lower birth rates and less immigration, presents a challenge to economic growth.

The view is changing as to what level of unemployment will lead to inflationary pressures, allowing the Fed and other central banks to become more comfortable with a tighter labor market. As a contrast to Europe’s sluggish interest rate environment, the Fed is moving to an average inflation target, which means that they will let inflation run higher for longer. In a low inflationary
environment, this appears to be an appropriate approach. As a result, we are not anticipating additional Fed Funds rate moves in 2020.

At the onset of this new decade, population growth and productivity are at the heart of GDP growth. Increasingly of concern, in the developed world in particular, are a declining birth rate and more stringent immigration policies. As of year-end 2019, US population growth was the slowest in 100 years due to declining births, rising death rates and slowing immigration. In 2019, the US population grew by approximately 0.5%, or 1.5 million people, for a total of 328 million.

Outside the US, many developed countries also are challenged by an aging population and sluggish GDP growth and productivity. For example, Japan recently announced that its population declined by 500,000, significant in a country of 130 million. Japan’s Nikkei stock index peaked in December 1989 and, 30 years later, is still down 39% from its high, a clear example of the negative impact of this demographic headwind. In stark contrast, emerging markets enjoy a younger average demographic, a rapidly emerging middle class and a growing infrastructure. These factors position them well for future GDP growth. 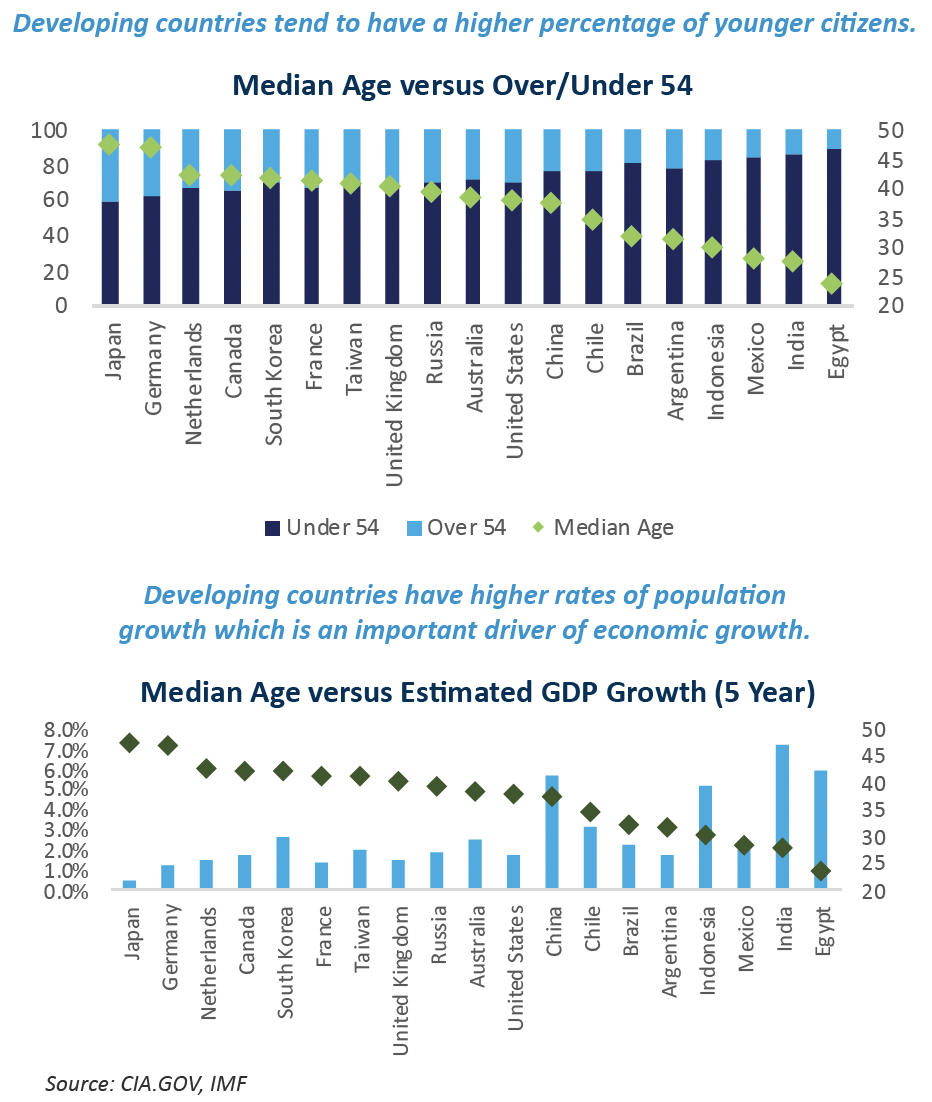 The Road To The White House

Throughout this election year, we expect increasing political rhetoric to introduce more economic and market volatility. On the global stage, the timing of a final trade deal with China, whether pre- or postelection, may introduce additional uncertainty to a steadily growing US economy.

The Fed is likely finished with further rate cuts for the time being, an assumption we believe is effectively priced into the yield curve. We anticipate a gradual increase in interest rates, resulting in a 10-year Treasury yield that could eventually attract yield-starved global buyers. However, this “lower for longer” interest rate environment has the potential to continue to drive investors to equities, as has been the case for the last several years.

A Stellar Year In Context

To understand the exceptional upward trajectory of the 2019 equity markets, consider year-end 2018. Fears of both continued Fed rate hikes and a trade war-induced recession drove the S&P 500 down approximately 20% by Christmas Eve 2018. The announcement by Fed Chairman Powell, at last year’s American Economic Association conference, that the Fed was going to be data dependent, along with three rate cuts, buoyed investor confidence and reversed the damage.

In fact, the markets recovered 2018 losses by late April 2019, trading in a range until fourth quarter 2019 when trade agreement hopes and the positive stimulus from lower interest rates boosted investor confidence. As a result, the S&P 500 returned 9.1% for the fourth quarter, bringing the full year tally to an impressive 31.5% total return.

Evaluated without context, this would appear to be a stunning return, but starting points matter with all data, especially market returns:

Throughout 2018 and 2019 it was the contraction and expansion of price-to-earnings multiples that drove equities, rather than earnings growth. Although investor confidence has recovered from 2018 lows, retail investors still are not entering the equity markets in droves. We believe investor confidence will be on firmer footing once the political landscape becomes clearer and the political rhetoric subsides. The election clearly will influence investor sentiment about healthcare, regulation, financial services, taxation and other issues that may be part of the political discussion. 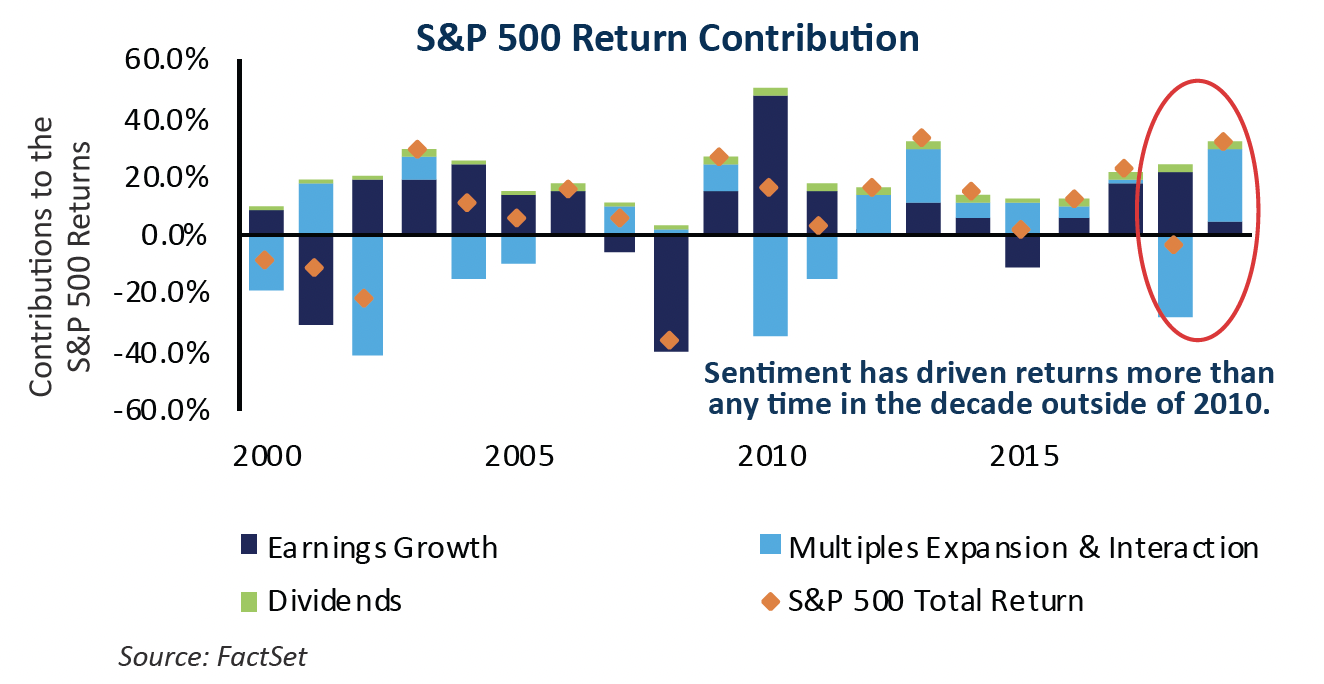 The Results Are In

It is interesting to consider the potential impact of an election year on the equities market from an historical perspective. Since 1872, there have been 37 US presidential elections. The average return of the S&P 500 in these years has been 6.1%.

When we drill down further, we find:

A Decade Led By Technology and Healthcare

As we look back over the past decade, the average annual return of the S&P 500 since December 31, 2009 (post financial crisis) was 13.6%. While Technology and Healthcare were the best performing sectors in the equity markets, the Energy sector was the decade’s worst. Energy now represents a mere 4% weighting in the S&P 500, its lowest weighting ever.

We expect 5% earnings-per-share growth for the companies in the S&P 500. If business confidence increases throughout the year, in response to accommodative Fed policy and a healthy consumer, there is a good possibility that growth will be better than expected. However, given modest growth combined with an above-average P/E valuation, we expect stocks will deliver only a mid-to-high single digit return in 2020. 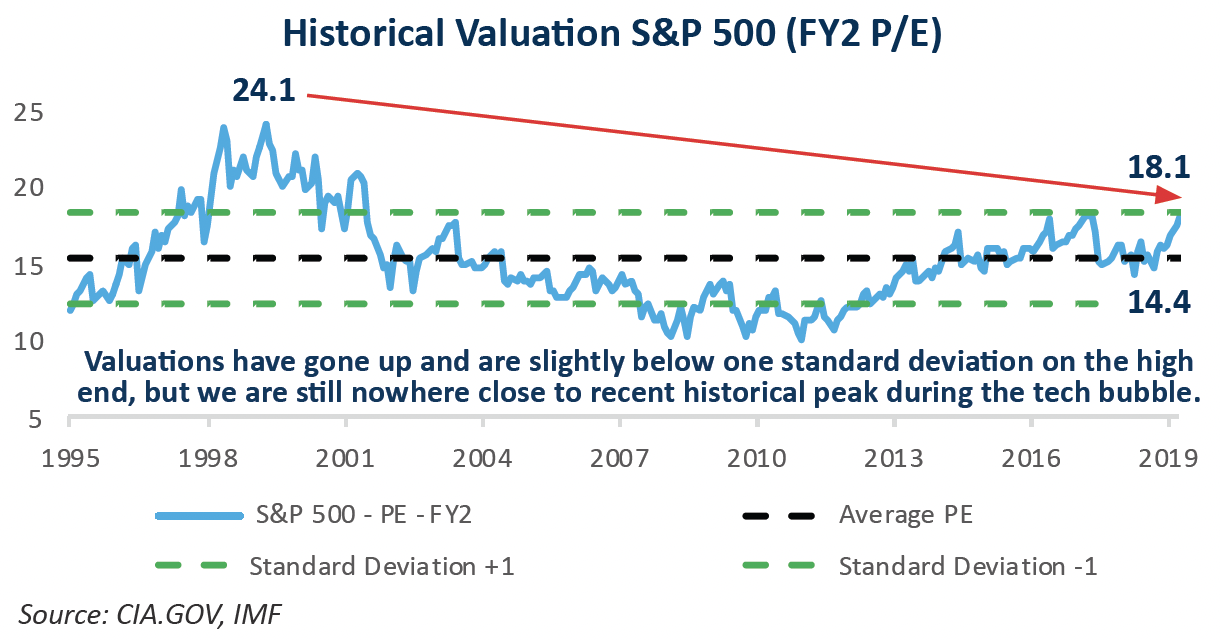 As we enter the next decade, we anticipate that the same tailwinds and headwinds that buffeted the equity markets for the past decade will prevail. Thoughtful stock selection is key. We will continue to invest in high-quality companies with competitive advantages that position them well for long-term growth, regardless of the economic environment or any short-term volatility.

Not only were equity investors celebrating as 2019 came to a close, but also fixed income investors enjoyed healthy returns as rates fell throughout the year. The Bloomberg Barclays US Aggregate Index returned an impressive 8.7% in 2019. Investment grade bonds returned 14.5% for the year. Strong fixed income returns were somewhat surprising, as most investors anticipated higher interest rates and modest bond market returns.

The Search For Yield Continues

A Decline In Corporate Bond Supply In 2019

Net issuance declined, with only $427 billion in corporate bonds issued in 2019, compared with $465 billion in 2018. In addition, gross corporate bond supply was down 1.4% from 2018 supply levels. With scarcer supply, positive GDP growth and strong investor demand, the environment was favorable for corporate credit spreads. Fund flows into taxable bond funds/ETFs were positive for the year while interest from international investors remained steady.

Our Corporate Bond Outlook For 2020

In 2020, we expect corporate bond supply to decrease again as M&A likely furthers its slowdown and companies continue to deleverage. Robust investor demand, fueled in part by an aging US demographic, and portfolio rebalancing as the stock market has climbed, should continue. Treasury yields likely will be range-bound, and spreads have little room to tighten.

In this low-yield environment, we will remain overweight corporate bonds for additional incremental yield relative to Treasuries. Credit fundamentals and security selection continue to be key, and we will invest in bonds from issuers that we believe can weather a downturn, should one occur within the next few years.

In 2019, the municipal bond market enjoyed the best year since 2014, with the Bloomberg Barclays Municipal Bond Index logging a one year total return of 7.5%. While the sharp drop in Treasury yields in 2019 set the path for all fixed-income sectors, tax-free bonds benefited from relentless demand. Municipal bond funds took in a record net $90 billion (versus $4 billion in 2018) with 51 consecutive weeks of inflows this year.

Heavy demand from individuals offset modest selling from banks and insurance companies that derive less benefit from a tax-free income stream following the sharp reduction in corporate tax rates. Demand was particularly strong among residents of states most impacted by the new limit on the deduction of state and local taxes in the 2017 Tax Cuts and Jobs Act. Many of our clients reside in these states (New York, Maryland, California, Massachusetts, and Connecticut).

Our Perspective On Municipal Bond Supply

After a surge in supply in the second half of the year, municipal bond issuance increased approximately 22% in 2019. However, coming off of a supply-constrained 2018 (supply was down 24%), it remained a challenge to find attractively-priced bonds.

Much of 2019 issuance was in the taxable municipal bond market as issuers pre-refunded tax-free bonds with taxable bonds following the 2017 tax reform. Prior to that, tax-free bonds were used to pre-refund similar outstanding issues so losing this source of volume severely curtailed tax-free supply. However, we do expect to see a pick-up in traditional tax-free issuance later in 2020 and into 2021 as a variety of deferred infrastructure projects move forward.

As we move forward in 2020 there are a number of developments we will keep on our radar screen:

The views expressed are subject to change. Any data cited herein have been obtained from sources believed to be reliable. The accuracy and completeness of data cannot be guaranteed.

Past performance is no guarantee of future results.