First, we want to start by extending our fervent hopes that you and your family are well and that your lives have not been too upended by the pandemic. At 1919 Investment Counsel, we have been working remotely for only about a month, but it feels as though more than a year has passed since we were all in the office together and life seemed normal.

COVID-19 continues to have a deep impact on our lives because it is affecting us in so many significant ways: Socially, medically, economically, and financially. The consequences of shutting down the economy are being reflected in an ongoing way throughout all financial markets. It is barely over 2 months since the market highs were reached in mid-February, followed by a decline of nearly 34% in the next month, before a sharp rise once again, as the Federal Reserve’s massive liquidity measures and government stimulus programs were rolled out. To date, government stimulus alone equates to more than 15% of US GDP. As of the close of business today, the S&P 500 is down 12.2% for the year, off 16.2% from the high. This is the level at which it was trading just last summer.

In terms of markets, nowhere has the economic dislocation been more evident than in the oil markets. Earlier this week, the price of oil in the US fell to negative $37.63. Certainly there are some quirky technical factors at play in the futures market for oil, but there is no question that the price is an extraordinary reflection of the ripple effects of the crisis. With a sudden stop of economic activity, demand for oil has collapsed amid a backdrop of ample supply and storage facilities that are filled to capacity. There simply is nowhere to put all the excess oil being pumped out of the ground. The price began to drop sharply on Monday as traders who had long positions in oil were willing to pay to have it taken it off their hands, eventually pressuring the price into negative territory. No, this does not mean gas stations will begin paying you to fill your car with gas because refining and transporting costs as well as taxes are added to the cost of the commodity before it reaches the pump.

The other big sign of stress in the system is the enormous number of American workers filing for unemployment benefits, 26 million plus as of this week. In the five weeks since the middle of March, the number of workers needing assistance has equated to about 16% of the US workforce. This statistic does not include workers whose hours or pay have been cut back. A high level of unemployment is significant in its own right, but even more so when consumers account for about two-thirds of the economic activity in the US. Several government policy measures recently have been enacted to help workers and small businesses get through the shutdown, including $350 billion for the Paycheck Protection Program that was quickly exhausted, as well as an additional $450 billion approved today. Nearly half of the businesses in the US employ fewer than 500 people.

From an investment perspective, the market decline is a reflection of much of this bad news. A month ago, equity markets seemed to be in free fall until Fed liquidity and government stimulus programs became policy, paving the way for this sharp rally off the lows. We continue to see a high level of volatility in markets and expect it will continue until the impact of the virus on corporate earnings becomes clearer, and the worst of the economic impact is in the rearview mirror. As we head out of the crisis, consumer demand will begin to recover, benefiting from lower interest rates, lower oil prices, financial stimulus and low inflation.

It may be helpful to note that the equity market is forward-looking and bottoms, on average, 5 months before the end of a recession. Despite nerve-wracking moves in stocks that we have witnessed lately, for long-term investors the choice of bonds, in an environment of the 10-year US Treasury yields of 0.6%, is not a promising one. Bonds may feel like a viable alternative over the next quarter or two but offer very little return potential once the economy starts to heal. 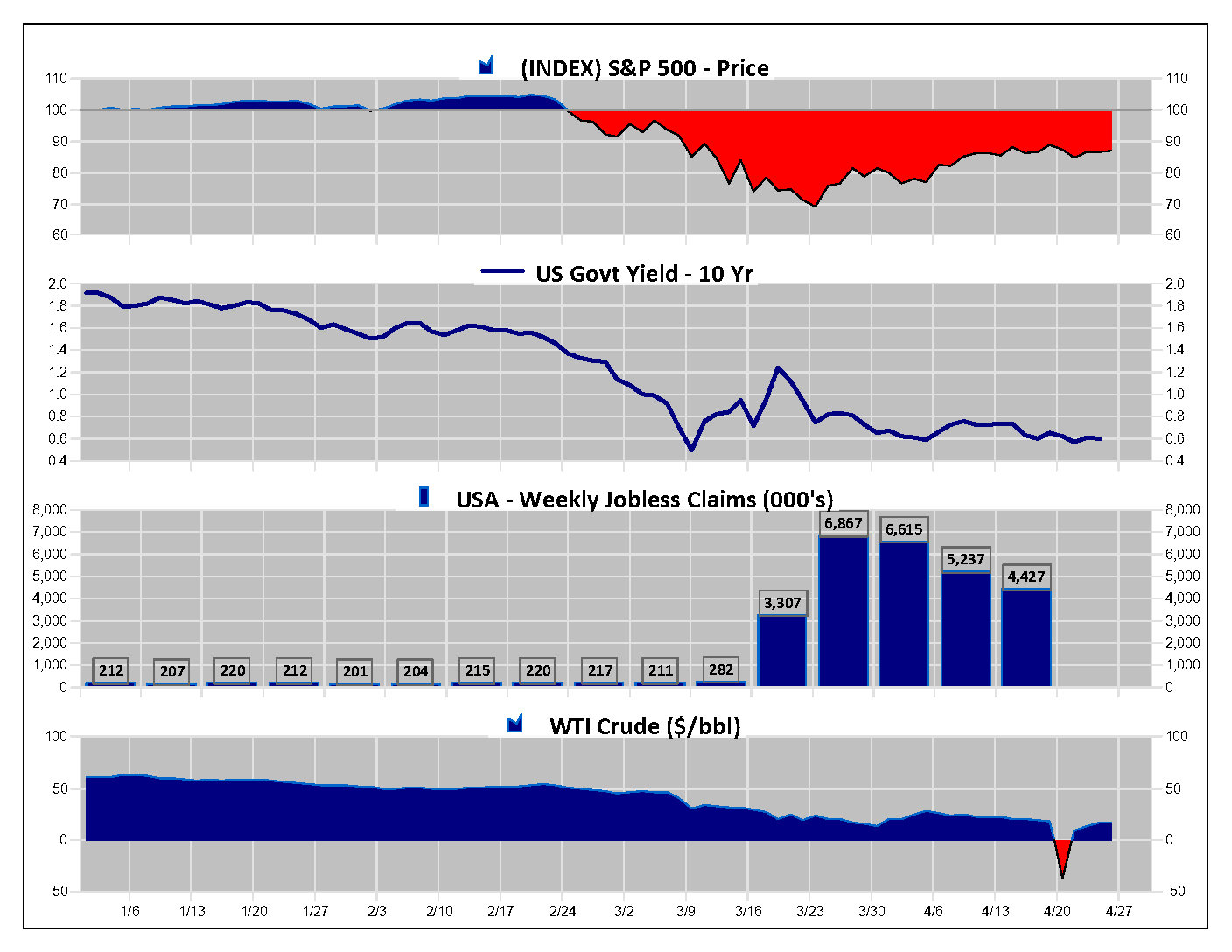 Containing the healthcare crisis is crucial; the sooner it happens, the faster the economy will begin to heal. The US economy likely will open gradually, possibly on a regional basis, at a speed based on a decline in new confirmed cases as well as innovations in virus testing and treatment. Until then, Americans are faced with a precarious trade-off between our economic and our personal health.

The virus created uncertainty which changed behavior, bringing our economy to a halt. The reverse is also possible, where uncertainty is reduced, behavioral changes gradually revert to pre-crisis levels and the economy comes back online. To emphasize this point, our healthcare analyst, Chris Delpi, has indicated that:

We hope these last few points will offer some reasons for optimism. Stay well.