In 2003 researchers working on the Human Genome Project succeeded in decoding the sequence of genes that make up the human genome.   It was an important breakthrough that marked the beginning of a multi-decade effort to understand the genetic causes for disease and development of targeted therapies.  To put this opportunity into perspective, consider that with today’s standard of care, patients are treated after disease progression with drugs approved in large randomized studies that generally don’t account for the physical, environmental and hereditary aspects of each patient.  The idea with Precision Medicine is to combine clinical with genetic data to identify the propensity for disease at an earlier stage, and to treat with targeted therapies based on a patient’s unique characteristics.  Looking ahead, recent breakthroughs point to a future where genetic mutations can be repaired or even replaced, resulting in a lasting cure for a host of deadly diseases.

Precision Medicine has the potential to disrupt many parts of healthcare, but it is still in its early stages.  Going forward it will require coordination of providers, patients, payers and regulators to fully realize its benefits.  The first investments we have made in this theme include Illumina (ILMN) and Exact Sciences (EXAS), two companies that address different opportunities in the field of genetic testing.  Illumina is the clear leader in DNA sequencing systems with nearly 75% market share, and Exact Sciences is the leading provider of genetic tests for colorectal cancer, the third most common form of cancer in people over 50.

DNA sequencing is used to ascribe genetic markers in the human genome to physiological traits, and has found widespread use in analyzing cancer tumors, tracking neonatal development and at a large enough scale to enable the development of a databank of genetic mutations.  As sequencing costs have fallen, we have seen an explosion in the number of tests for specific gene abnormalities.  We have also seen the launch of over 17 government-sponsored population-scale DNA sequencing programs[1] including the UK Biobank (500K samples) and the “All of Us” biobank in the United States (1 million samples).  Consumers have also shown a strong interest in genetic testing to gain health and ancestry insights from companies such as 23AndMe and Ancestry.com, who claim 3 million subscribers and shipments of 14 million DNA testing kits[2].  Our investment in Illumina is based in part on the belief that demand for DNA sequencing systems will continue to grow in support of these efforts, fueled initially by reductions in sequencing costs, followed by expanded genetic tests at population-scale, and ultimately drug development based on genetics.  A study published in 2016 showed that the likelihood of a development-stage drug reaching full FDA approval increased from 8.4% to 26% when genetic biomarkers were used[3], providing a strong commercial incentive to use this technology.

To expand the addressable market for DNA sequencing it’s important to drive down the cost of genetic testing.  Figure 1 below shows the decline in “Cost per Genome” over time, as calculated by the National Human Genome Research Institute[4]. 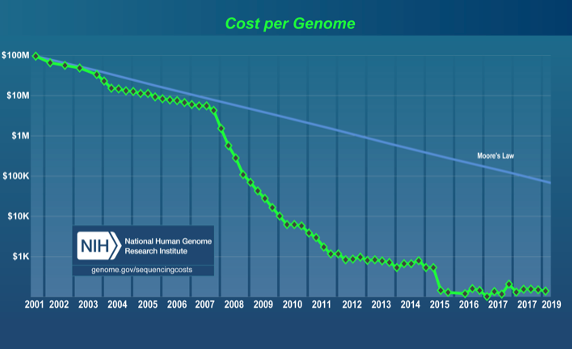 Figure 1. The cost of sequencing one human genome as reported by the National Human Genome Research Institute (NHGRI), July 2019. http://www.genome.gov/sequencingcostdata

It’s interesting to note the comparison to Moore’s Law in Figure 1 which describes the historical decline in the cost of silicon integrated circuits.  DNA sequencing costs have declined faster than integrated circuits thanks to breakthroughs such as Polymerase Chain Reaction (PCR) and gene cloning in 2008, known as Next-Generation DNA Synthesis (NGS) and advances in the throughput of DNA sequencers.  DNA sequencing remains a fruitful area of research, with a long development pipeline to fuel growth.  Today Illumina has 75% share of the DNA sequencer market, with an installed base
of over 11,000 machines in research and clinical laboratories.  The company generates 2/3rds of its revenue from consumable reagents for multi-gene test panels, an opportunity which continues to expand, and 1/3 of its revenue from hardware and annual service contracts.

In the ten years since NGS was adopted (2008-2018), the cost to sequence a human genome declined 6 orders of magnitude, during which time Illumina’s revenue has grown at a compounded rate of 19% per year.  Likewise, the numbers of new genetic tests for specific biomarkers has quickly grown, averaging 10 new tests per day[5], all of which require DNA sequencing systems.  In our view, as the cost of DNA sequencing continues to decline, we are likely to see an expansion in population-wide sequencing studies, and an expanded battery of tests to detect gene abnormalities.  Insights gained from this research are just beginning to be used in practice with new gene-therapy treatments such as CAR-T[6], where white blood cells are extracted, engineered, and returned to the body to fight cancer, and CRISPR[7], in which whole segments of DNA are replaced.  Several of these treatments are at an early stage, but today basic research and testing are quite active and represents a strong demand-driver for DNA sequencing systems and consumables.

Exact Sciences developed the colorectal cancer (CRC) test Cologuard to detect and guide treatment of CRC at an early stage, which is key to surviving the disease and lowering the cost of treatment.  Unlike most genetic tests which rely on a tissue sample from a tumor biopsy, Cologuard detects 11 distinct cancerous and precancerous biomarkers in stool samples – biomarkers detected by DNA sequencing.  The test is less invasive than a colonoscopy, can be done at home, and is supported by most major health plans including Medicare.  In 2018 the American Cancer Society changed its screening recommendations from 50 yrs. of age and older to 45 yrs. and older, expanding Cologuard’s addressable market by about 20%.  Our investment in Exact Sciences is based in-part on the belief the Cologuard can disrupt colonoscopies as the standard of care and establish itself as the new paradigm for CRC screening.

The market opportunity for Cologuard is significant, with an estimated 5% share of an 87M US screening market (people over age 45) where 48% of new patients report having never been screened[8], and 40% report only having colonoscopy-based screening for CRC.  Since FDA approval in 2014 and the start of sales in 2016, Cologuard has grown at a 119% compounded rate for the last 3 years (through 1Q19), and a marketing agreement with Pfizer announced at the end of 2018 should further expand the number of oncologists knowledgeable about the product.  Looking ahead the company is preparing for clinical trials with Cologuard 2.0, offering the potential for higher accuracy and greater sensitivity by detecting an expanded set of biomarkers.

Beyond Cologuard, Exact Sciences is working with 50 researchers at the Mayo Clinic on a new type “liquid biopsy” test which detects cancerous tumor fragments in blood using DNA sequencing.  Liquid biopsies have great potential and would be highly disruptive to tissue-based oncology tests.  Figure 2 shows the cancers for which Exact Sciences researchers have identified biomarkers, covering many of the most common and deadly forms.  The company estimates that the liquid biopsy test market could be a $13B opportunity by 2030, and while it’s too early to make an accurate forecast, it’s clear that the current opportunity with Cologuard can support solid growth in the intermediate term, and the expanded set of genetic liquid biopsy tests have the potential to support strong growth over the long-term. 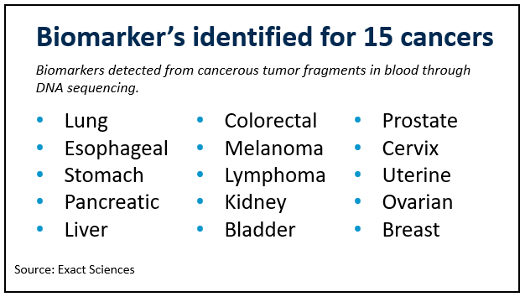 Figure 2. Cancer types for which biomarkers have been identified by Exact Sciences.

Precision Medicine is an exciting investment theme and has the potential to disrupt many parts of the healthcare landscape.  In this note we have focused on just one area, genetic testing, to describe the rationale for our investments in Illumina and Exact Sciences.  In time we anticipate investing in other areas, including gene-editing and companies that leverage genetics for drug discovery.