If ever there was a week that proved the axiom, “investors hate uncertainty,” it was this past week.  Investors have been primarily focused on two important questions:  how is the Federal Reserve going to respond to inflation, and what is going to be the result of the Russia-Ukraine war?  Unfortunately, there is no answer for either.  What will happen in Ukraine is unanswerable, but we can make educated guesses about certain things such as the price pressures on energy and commodities, namely wheat.  Efforts to divine where the Federal Reserve will guide interest rates is a game that has been played for many decades with mixed results, but analysts now have far more information and dynamics to deal with.  We will have more on the Fed in the economics section.  The point here is that uncertainty reigns supreme.

In the midst of great volatility, the Dow closed down 0.24%, the S&P 500 closed down 0.21%, and NASDAQ closed down 1.54%.  But those numbers go nowhere near describing the week’s volatility.  In this case, a picture is worth a thousand words. 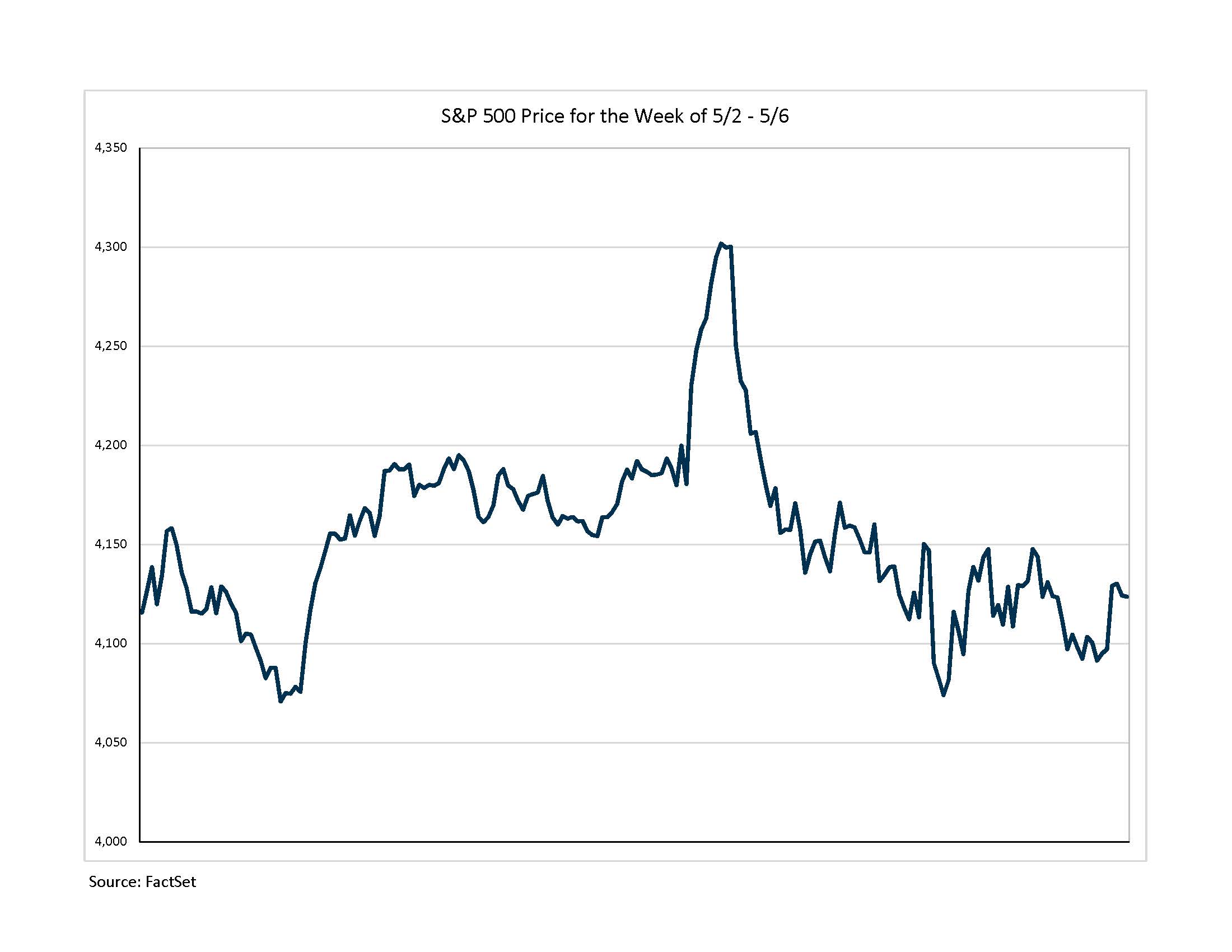 As we wrote earlier, there are many more things to worry investors besides Russia and the Fed—labor markets, China, trade, and domestic politics, to name a few.  Investors trying to navigate these difficult shoals must feel like members of Alfred Lord Tennyson’s famous “The Charge of the Light Brigade.”

At the moment, we believe the market is focused on the Federal Reserve and the questions of where interest rates are going, and will they push the economy into a recession?  One of the Fed’s two principal mandates is to manage the money supply and prevent inflation, but they do not want to push the economy into a recession.  The problem is that the future path of inflation has many potential outcomes.  They make very educated guesses, but the economy is influenced by humans and they can be quite unpredictable.

We watched and listened to Fed Chairman Powell’s press conference and felt a bit comforted by it.  He made the Fed’s position as clear as possible.  The Fed allowed liquidity, money supply, and quantitative easing to get out of hand which has led to elevated inflation.  The job now is to reverse course and bring them back in line.  He told us what the immediate steps would be—raising rates one half a percent and reducing quantitative easing.  This was not an aggressive approach and was what consensus was expecting.  However, as the meeting approached, some analysts and investors began to argue that the Fed was going to take a harder stance.  In the end, the Chairman argued for a reasonable course.  He was adamant that this was the first step in fighting inflation, and the Fed will not hesitate to take stronger steps if necessary.  Powell felt this could be done without pushing the economy into recession, but, of course, this is an open question.  There are good arguments on both sides.  After reading Ryan Schutte’s (1919 Investment Associate) April Economic Update section, I would side with the Chairman.

With persistently high inflation indicators, the first decline in GDP since the first quarter of 2020, and historically low consumer confidence readings, recession talk has understandably ticked higher.  However, despite clear areas of concern, a deeper look at some of April’s indicators provides reason for optimism.

First quarter GDP¹ surprised to the downside, declining 1.4% at a quarter-over-quarter seasonally-adjusted annual rate.  Forecasters expected a modest increase of around 1%, but outsized impacts from a widening trade deficit and decreased private inventory investment overshadowed strong consumer spending and capital expenditures.  Despite the negative print, the situation is not as dire as one might think.  Decreased inventory spending was to be expected after businesses invested heavily to avoid shortages during the holiday season in the prior quarter.  Additionally, a widening trade deficit reflects strong domestic demand for imports paired with continued supply chain issues and reduced global demand which has weighed on companies’ abilities to export goods.  Resilient consumer demand and strong capex spending are both positive takeaways from the report, and expectations are for inventory levels to stabilize going forward.  Forecasters are looking for a bounce back in second quarter economic growth, with the Atlanta Fed GDPNow model estimating a growth rate of 2.2%.² After several quarters of above-trend growth, economic activity appears to be normalizing.

Headline inflation measures remained elevated in April, however, we saw early indications of a moderation in core prices.  While the Consumer Price Index increased 1.2% over the course of the month, the core index rose just 0.3%—below consensus and down from February’s 0.5% rise.  Similarly, the headline PCE Deflator accelerated to 0.9% month-over-month while the core measure slowed to 0.3%.  By stripping out more volatile components like food and energy, the core inflation readings provide a better signal of durable price increases more directly stemming from consumer demand.  Expectations are that the demand for goods should slow as consumers shift more of their spending to services from goods in a more normalized post-pandemic environment.  With this in mind, many believe we are at or near the inflation peak, but there are upside risks given the unpredictability of the Russia-Ukraine war and uncertainty over the extent that a decline in goods prices can help offset rising services inflation.  However, even if inflation readings decelerate from current peaks, it does not appear that we will return to 2% inflation anytime soon.  With the Fed’s flexible inflation target policy, inflation temporarily above 2% can be acceptable as long as expectations do not become unanchored.  As we have reminded readers time and time again, more sustained price increases will heighten the risk of inflation becoming entrenched in future expectations and the phenomenon known as the wage price spiral.³ Durable inflation components like housing, rent, and wages are important factors in the inflation expectations discussion.  Insufficient labor supply is continuing to put pressure on businesses to offer higher wages in order to fill open positions.  The Employment Cost Index (ECI) is a reliable measure of labor costs, and, like other wage inflation indicators, is elevated, reporting a 4.5% year-over-year increase in the most recent release.  Looking forward, the labor market, specifically labor supply, is a crucial factor for easing inflation pressures.

The labor market continues to exhibit strength.  Non-farm payrolls increased by 428,000 in April, level with March’s 428,000 pace, while the unemployment rate held steady at 3.6%.  Job openings hit another record high at over 11.5 million, and unemployment claims continue to hover near all-time lows.  The labor force participation rate slightly worsened, declining by 0.2 percentage points to 62.2%—a negative for hopes of labor supply increases.  Even if labor supply does not return to pre-pandemic levels, prospects of slower economic growth in the near term may provide hope for an easing of labor market tightness.  Historically, when economic growth cools, firms respond with reduced hiring and increased layoffs, ultimately leading to higher unemployment.  With around 6 million unemployed and over 11.5 million open jobs, openings have room to decline without leading to reduced employment levels.  If this were to come to fruition, we could see improvements in the labor supply issue without any actual increase in the number of people looking for work.

Consumption metrics were strong again this month while consumer sentiment indices showed slight improvements.  Both Personal Consumption Expenditures and Retail Sales (ex-auto) increased 1.1% over the course of the month, and personal income increased 0.5%.  In a change of trend, the Michigan Consumer Sentiment Index increased nearly 10%, albeit from record low levels.  Nearly all of the gain was due to more positive future expectations as opposed to current conditions, with positives stemming from higher wage expectations, a strong labor market, and a more positive outlook on inflation.4  Despite still historically depressed confidence levels, strong consumption and spending metrics signal a resilient U.S. consumer in the face of higher inflation and geopolitical uncertainty.

In 2019, we introduced a concept called the Sahm Indicator5—an indicator developed by Claudia Sahm with the intention of finding a way to identify recessions earlier than conventional methods.  Her core finding is that rapid increases in unemployment, even if relatively small, have been an accurate indicator of recessions.  With the possibility of an economic downturn at the forefront of investors’ minds, it seems like an appropriate time for an update.  Following Friday’s employment report and a reported unemployment rate of 3.6%, the Sahm Indicator suggests minimal chance of a looming recession.  Specifically, the indicator sits at -0.13.  With a reading of 0.5 indicating that a recession is already underway, -0.13 suggests a 1% chance that we are in a recession now, a 2% chance of a recession occurring in the next three months, 5% in the next six months, and 10% in the next year.  While no one has a crystal ball, economic indicators, Sahm included, are not signaling that a recession is imminent.

1Gross Domestic Product
2GDPNow. Federal Reserve Bank of Atlanta. https://www.atlantafed.org/cqer/research/gdpnow.
3The idea that untethered inflation expectations could lead to a demand for higher wages, resulting in firms raising prices to offset increased input costs, causing workers to expect even higher wages, and so on.
4Surveys of Consumers. University of Michigan. http://www.sca.isr.umich.edu/.
5The Sahm Indicator is the difference between the U-3 unemployment rate (in the form of its three-month average) and the minimum unemployment rate from the previous 12 months.  When the three-month average is at least 0.50 percentage points above its minimum, the economy is already in a recession.