An important global economic week as equities hold their gains

This past week was very busy for analysts, whether focused on economics, politics, or defense.  Important developments came from around the globe. 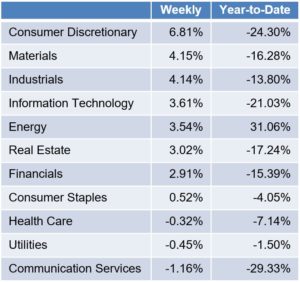 We have avoided commenting on the Ukraine-Russia war, other than to say it has been damaging to the global economy by creating shortages in both food and energy, thereby adding to inflationary pressures.  Of course, lower food and energy prices would not put an end to inflation, but any improvement would certainly help and take some of the pressure off central bankers.

Another important international event is the resignation of Italian Prime Minister Mario Draghi.  Mr. Draghi took office with great hope that he would bring stability and growth to the moribund Italian economy.  Mr. Draghi’s successful tenure as president of the European Central Bank gave him great status to accomplish his goals.  Alas, Italian politics got to him as it has done to so many others.  Meanwhile, the U.K. is suffering a political crisis as Prime Minister Boris Johnson was forced to resign, and, in France, President Macron has a low confidence rating.

The European Central Bank (ECB), under the direction of its president, Madam Christine Lagarde, has started to raise rates for the first time since 2011.  Interestingly, at that time, the president of the ECB was Mario Draghi.  This move by the ECB puts the central banks of the West in concert.  The only major central banks not raising rates are Japan, Russia, and, importantly, China.  It is worth noting that motivations may be very different.  Neither the Chinese nor Russian central banks are independent.  They are political tools.

Madame Lagarde is facing a number of serious problems.  The EU economy is slowing, the euro has been depreciating to values not seen in 20 years, and inflation is at dangerous levels and rising.  Italy remains a problem child with very high debt to GDP levels.  There is a danger in what the ECB is doing that would not be present for any other central bank.  Readers will remember two weeks ago when we wrote about the difficulties of the EU having a common currency for 19 independent countries.  Changes in interest rates and currency values affect each country differently.  This move by the ECB may help an industrial country like Germany, but hurt a country like Italy.  This disparity is the problem with having a common monetary policy for 19 independent countries.  At present, it is difficult for the EU to run a common monetary policy while not creating a sovereign debt crisis for some, most likely Italy, as mentioned earlier.

Unlike the Great Recession of 2007-2009, China is not immune.  We all should remember President Xi announcing to the world the failure of the Western economic system and the ascendency of the Chinese system.  It appears this pronouncement may have been a bit premature.  The economic and financial problems in China are deep and many.

In the United States, all eyes remain on the Fed and its fight against inflation.  The debate is not whether the Fed will raise rates, but by how much.   The betting odds are between either 75 or 100 basis points.  With last week’s market behavior along with news of the apparent easier flow of wheat and energy abroad, the Fed may choose the lower of the two.

Last week, Alan Blinder¹ wrote an interesting opinion piece in the Wall Street Journal comparing the financial markets and the Federal Reserve to the fable of the “Tortoise and the Hare” and, interestingly, Milton Friedman.  His argument is simple.  In the short term, the markets are dominated by traders who thrive on volatility.  Conversely, monetary policy takes time.  Here is why I thought it is interesting that he used Friedman.  Milton Friedman made perhaps the most famous quote about inflation and monetary policy when he said, “Inflation is always and everywhere a monetary phenomenon.”  While most use this quote to encourage monetary policy action, Blinder uses one of Friedman’s lesser known quotes warning that monetary policy acts with “long and variable lags,” and makes his point perfectly.  The Fed should not be pressured into overaggressive policies by short-term market behavior.  This is certainly not an argument for the Fed not to tighten more, just to act with patience.

We will follow up with more detail on China and U.S. economics next week.

Economic forecasting is always difficult, and merging economics with global politics makes it even more so.  The inflation picture has an outside chance of improving in the near future.  For this to occur, the Russia -Ukraine agreement must hold.  Supply lines, as rumored, must continue to show signs of coming back to normal, and the Fed must be resolute.

Look for more on China and the U.S. next week.

¹Alan Blinder, Professor of Economics and Public Affairs at Princeton University and former Vice Chair of the Federal Reserve.