China’s Struggles and a Change in London Thinking – Perhaps

This past week, United States equity markets lost all of the previous week’s gains. The main concern for investors was that the economic releases indicated there may be enough strength in the economy for the Fed to feel obligated to raise interest rates by another 75 basis points. Investors sold across the board with no safe haven. We cover these reports extensively in the Economic Indicator section. 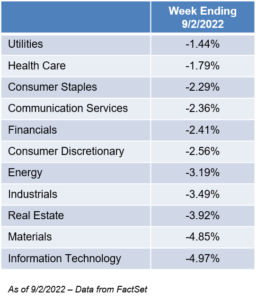 The Federal Reserve finds itself in a delicate position.  Not only does the Fed have to make an educated guess about the strength of the economy and what and when the impact of an increase in interest rates will be, but they are in the process of reversing their 14-year experiment of “quantitative easing,” which is another way of adding liquidity into the economy, so reversing it is taking money out of the system.  While the Fed engaged in a more passive quantitative tightening from 2017 to 2019, this version is much larger and more active, so the Federal Reserve remains the primary concern for U.S. investors.  A lot has been written about how the Powell-led Fed is facing new challenges.  It should bolster investor confidence to remember that both Paul Volcker and Alan Greenspan faced new challenges and were successful in addressing them.  We remain confident in the Powell-led Federal Reserve.

Unfortunately, there are other concerns investors must be aware of, many of which are international.  The Ukraine war is wreaking havoc in the global energy market, and winter weather will only increase energy demand, adding inflationary pressures.  The energy problem should abate with time, but two other international concerns are more troubling—China and the U.K.

Liz Truss has been elected Prime Minister of the U.K.  She replaces Boris Johnson, who many believe led the U.K. into hard times.  On Monday, Ms. Truss pledged action to tackle the crisis in a short victory speech at a conference center in London.  Without offering details, she promised a “bold plan” to cut taxes, build economic growth, and “deliver on the energy crisis” by dealing with people’s energy bills and addressing the long-term issues related to energy supply.  We don’t know much about her, so we will wait and see. We do know she started her political life while an Oxford University student, becoming president of the university’s Liberal Democrats, advocating the end of the monarchy, and now is the pride of conservatives.

We have been expressing our concerns about China’s Xi Jinping and his Long March from Deng Xiao Ping.  This is a very appropriate time for this discussion since the Chinese Politburo will meet on October 16th to elect a president.  It is as sure as anything can be that President Xi will be elected, and this time for life term.  He will have a lot to discuss.

We should all remember, during the Great Recession, President Xi and other Chinese dignitaries announced China had found the new way and that their economic system was the new economic model.  It appears their announcement was a bit premature.  Analysts have written about China’s real estate problems for years.  State owned banks and their smaller semi-private brethren financed real estate loans with virtually no capital.  Money was printed to fund these purchases.  Don’t forget, China has no independent central bank.  China’s effort to address COVID by isolating entire cities backfired, and President Xi’s efforts to reestablish government control over entire industries appears to have done the same.  China’s destruction of Hong Kong’s economic and political independence killed innovation in the process.

Perhaps the most interesting development concerns China’s largest and most public effort— the Belt and Road Initiative.  Problems with these enormous loans have been building, both financial and political.  The financial problems should have been obvious.  China made loans to very poor countries to finance large infrastructure projects. They were financially suspect from the beginning, but, when a global recession struck, their faults intensified.  Politically, China insisted that Chinese companies and workers be used for these projects.  One can imagine how popular that was.  Just to add a little more gas to the fire, Taiwan problems erupted.

For all who have an interest in China, October 16th is really an important date.

As we wrote earlier, we continue to have faith in the Fed.  The U.S. was the first country to fight inflation and is less impacted by the energy and grain shortages.  Investors should be focused on the upcoming mid-term elections.  There are significantly different economic views between parties.

In his Jackson Hole speech, Federal Reserve Chairman Powell reaffirmed the Fed’s unconditional commitment to price stability, even if it comes at the cost of softer economic growth and higher unemployment.  While the path to price stability does not necessitate a recession, it will likely require a sustained period of increased labor market slack, a moderation in consumer demand, and below-trend economic growth.  Generally, recent economic data has supported these themes, but further consistency is needed.

Inflation gauges showed encouraging signs of disinflation.¹  Led by declines in energy prices, the headline Consumer Price Index (CPI) was flat month-over-month, and the PCE Deflator declined 0.1%.  The core measures, which remove the food and energy components, also slowed, decelerating to 0.3% and 0.1% in August.  While these readings were a step in the right direction, the year-over-year measures are still very elevated relative to the long-term 2% target, and we should look for further consistency in the reversal lower going forward.² Shelter costs, measured by rent and owner’s equivalent rent,³ are significant factors in the CPI and PCE indices and will be crucial elements in inflation’s continued path lower.  While various housing market statistics suggest a slowdown in home prices, it will likely be a gradual process.  Furthermore, like prices paid for services, rental rates are less dependent on the housing market and more reliant on consumers’ willingness and ability to pay.  This is largely reflected by consumer confidence and labor market strength.  For this reason, easing labor market tightness and upward pressure on wages is critical in the ultimate goal of achieving price stability.

Friday’s employment report checked all the boxes for investors looking for increased labor market slack—job growth slowed to 315,000, there were downward revisions to June’s and July’s gains, and, driven by an increase in labor market participation, the unemployment rate ticked slightly higher to 3.7%.  Average hourly earnings also came in softer than expected, increasing 0.3% month-over-month.  However, July’s job growth numbers are still strong in an absolute sense, and, with the labor force participation rate still a full percentage point below pre-pandemic levels, over 11 million job openings, and annualized wage growth sitting at 5.2%, further slack is needed to reduce the labor supply-demand imbalance.

Consumer confidence indicators improved significantly this past month, signaling a potential trend change after months of readings near historical lows.  Future expectations improved significantly, led higher by the recent deceleration in many inflation measures.  This theme also materialized in a movement lower in five year forward inflation expectations. Outside of the survey data, consumption and spending indicators have proven resilient this year in the face of increased inflation and economic uncertainty.  Interestingly, just as consumer confidence has shown signs of improvement, consumption data has weakened with retail sales coming in flat month-over-month and personal consumption expenditures increasing 0.1%.  While one data point does not mark a trend, the impacts of rising rates and higher prices may be materializing in consumer spending patterns.

While August’s economic indicators showed encouraging signs of slowing inflation, the next leg lower may be more difficult to achieve.  Declines in goods and commodities prices have allowed inflation gauges to peak, but further progress will likely require increased labor market slack.  This would show up in fewer job openings, increased unemployment, and softer wage growth.  Friday’s employment report was a step in the right direction, but we need to see further progress in the months ahead.

¹Disinflation is when price increase but at a slowing rate.  Disinflation should not be confused with deflation where overall prices levels decline and the rate of inflation is negative.

³Owner’s equivalent rent (OER) measures how much money a property owner would have to pay in rent to be equivalent to the cost of ownership.