Equity markets were beaten down last week by many of the same factors that have been bothering investors since the beginning of the year—fear of inflation, rising interest rates caused by the Federal Reserve’s attempts to combat rising prices, a slowing economy, and the Ukraine/Russia war, to name a few.

The markets ended the week down.  The Dow lost 2.90%, the S&P 500 lost 3.05%, and NASDAQ lost 3.82%.  Investors were legitimately concerned that the economic slowdown was more widespread than originally thought.

As most of you have read, the market fell briefly into bear market territory¹ this past week.  It would not shock us if this occurred again.  We would urge investors not to be Chicken Little and panic.

The main issue for the economy is not whether the U.S. markets are moving into bear market territory, but a more dangerous question is whether or not the economy is headed for a recession.  It is an interesting and difficult question indeed.  A survey of the most important central banks tells us that almost universal monetary tightening is underway.  The most notable exceptions are Japan and China.  Japan has been in a below-trend growth mode for quite some time, so one wouldn’t expect them to tighten.  China is far more interesting. Their economy has been slowing, but no one really knows how much or for how long because of the difficulty in getting accurate numbers.  China is one of the world’s two largest economies, so it is very important to have a gauge.  Not only is their economy very large, but China is the hub of global supply lines.  We often look at comparative currencies to get a clue where confidence lies.  As evidenced by the chart below, the U.S. Dollar has appreciated against many foreign currencies year to date.  This appears to give the U.S. economy an advantage.

By far the most intriguing country to analyze is China.  We keep promising to spend more time writing about China.  Hopefully, markets will calm down, and we can spend next week on that fascinating country and economy. 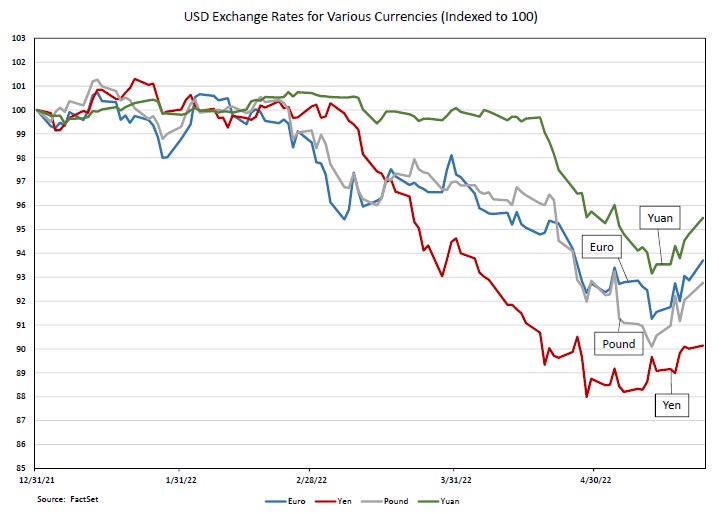 ¹ A bear market is a period in which a market index drops by 20% or more from the most recent high.